China’s nuclear power plant building spree got a little more frenzied this January, as the country kicked off its 21st project at Ningde 3. Two other units are already under construction at the three-island site in Fuding city in northeast Fujian province. The first phase of the project should comprise four CPR1000 reactors — an indigenous 1,080-MW version of an AREVA-designed pressurized water reactor. With construction of the fourth unit expected to start in mid-July this year, the Ningde units will come online between late 2012 and 2015, says the project’s majority owner, China Guangdong Nuclear Power Co.

The company reports that with this project, China will for the first time source more than 80% of its components domestically, from Chinese suppliers — including, for the first time, the entire digital control system. Likewise, in January, the State Nuclear Power Technology Co. (SNPTC) said it had selected 10 Chinese equipment manufacturers to accelerate the country’s deployment of domestically developed third-generation nuclear power technology.

But the country’s drive for domestically manufactured equipment is not limited to small components. The World Nuclear News reported that an important factor in SNPTC’s contracts with Westinghouse and AREVA for those companies’ AP1000 and EPR designs was technology transfer — and that both designs will play a major part in the country’s ambitious plans to have a nuclear capacity of 120 GW to 160 GW by 2030.

At least four Westinghouse AP1000 reactors are currently being built at Sanmen (Figure 1) and at Haiyang. At least eight more are being planned after them, involving substantial technology transfer, with about 30 more proposed to follow. The World Nuclear Association (WNA) has concluded that the AP1000 is to be the main basis of the country’s move to Generation III technologies. 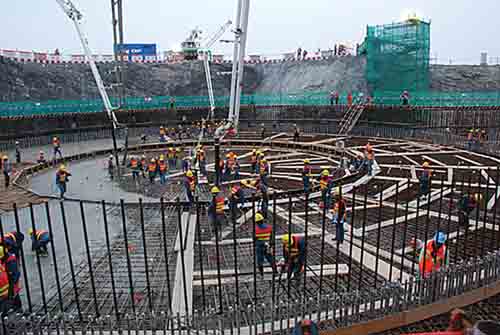 1. Made in China. In mid-January, China saw the official start of work on Ningde 3, the country’s 21st nuclear project in progress. Two other units are already under construction at the three-island site in Fuding city in northeast Fujian province. The first phase comprises four CPR-1000 units—an indigenous take on a 1,000-MW French-derived three-loop reactor. The project follows successful completion of the first pour of basemat concrete for Unit 2 at the Sanmen site in China, where the world’s first Westinghouse AP1000 is being built. But China and Westinghouse have also signed an agreement to co-develop and refine the AP1000, and to operate a larger reactor based on the design. Construction of the CAP1400 is expected to start at China Huaneng Group’s Shidaowan site in 2013; the reactor is expected to be online in December 2017. Courtesy: Westinghouse

The analysis stems from a 2008 announcement from Westinghouse that it was working with SNPTC and Shanghai Nuclear Engineering Research and Design Institute to develop a larger design of the AP1000, of 1,400-MW capacity — the CAP1400. Then, in October 2009, SNPTC and China National Nuclear Corp. signed an agreement to co-develop and refine Westinghouse’s design. Last December, state-run companies SNPTC and China Huaneng Group reportedly set up a 55% – 45% joint venture company to build and operate an initial CAP1400 at Huaneng’s Shidaowan site in Shandong province by 2017. The WNA speculates that that project may be followed by construction of a larger CAP1700 design. China is expected to own the intellectual property rights for both those designs.

Construction of AREVA’s EPR reactors at Taishan also seems to be proceeding uneventfully. But, as the WNA notes, no more EPRs have been proposed in the country — even though AREVA holds 45% of a 2008 engineering joint venture agreement that enables a technology transfer for the EPR and other pressurized water reactors in China and abroad. Under that agreement, AREVA will engineer and procure equipment for the EPR and the second-generation French-derived CPR1000. AREVA retains intellectual property rights for both reactors.