China has been struggling for years with endemic air pollution in major cities like Shanghai, and the nation’s traditional heavy reliance on coal has been challenged head-on by new government policies to cut emissions and reduce the carbon intensity of the power sector.

While major advanced coal plants and China’s massive build-out of its nuclear and renewables capacity have grabbed headlines, smaller generation is feeling the same pressures. Much of China’s pollution problems stem from thousands of small, inefficient coal boilers that the government has moved to shut down. But this generation, much of it distributed, has to be replaced with something.

Natural gas currently makes up a small part of China’s power mix, but the central government has aimed for at least a 10% share by 2020. Several major pipeline projects are in the works to boost nation’s gas supply, as well as a number of large liquefied natural gas import terminals. This gas will be needed to fuel the growing number of gas-fired plants, many of which employ combined heat and power (CHP).

One example can be found in the SAIC Volkswagen Automotive Co. factory in Anting northwest of Shanghai. SAIC Volkswagen was founded in 1984 as a joint venture between Volkswagen Group and China’s SAIC Motor Corp. The facility, one of the largest in the country, manufactures automobiles for the Chinese market under the Volkswagen and Škoda marks.

Small CHP for a Big Plant

The new CHP plant, supplied by MAN Diesel & Turbo, a member of the Volkswagen Group, comprises four MGT 6200 gas turbines with a combined total output of 26.52 MW (Figure 1). The plant produces 60.69 tons/hour of steam and 4.42 MWt of hot water. This is enough to supply 100% of the electricity needs of Car Plant 3 and a neighboring gearbox plant, and most of its process steam (the balance is supplied by auxiliary gas-fired boilers). 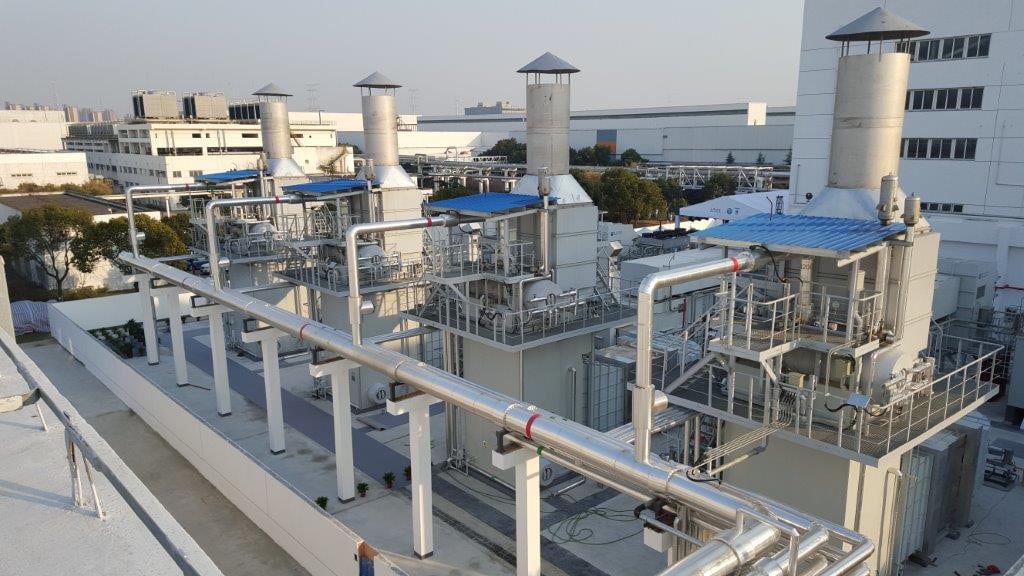 The plant achieves an efficiency of around 80% and emits 59,000 tons less CO2 than the old coal-fired boilers. This project was also the first deployment of the MGT 6200 in China, though MAN has been supplying generation technology to China for decades.

China has the world’s largest CHP fleet, but the large majority of it is coal-fired. Though much more progress needs to be made to modernize and clean up this sector, new gas-fired plants like SAIC Volkswagen suggest things are headed in that direction.