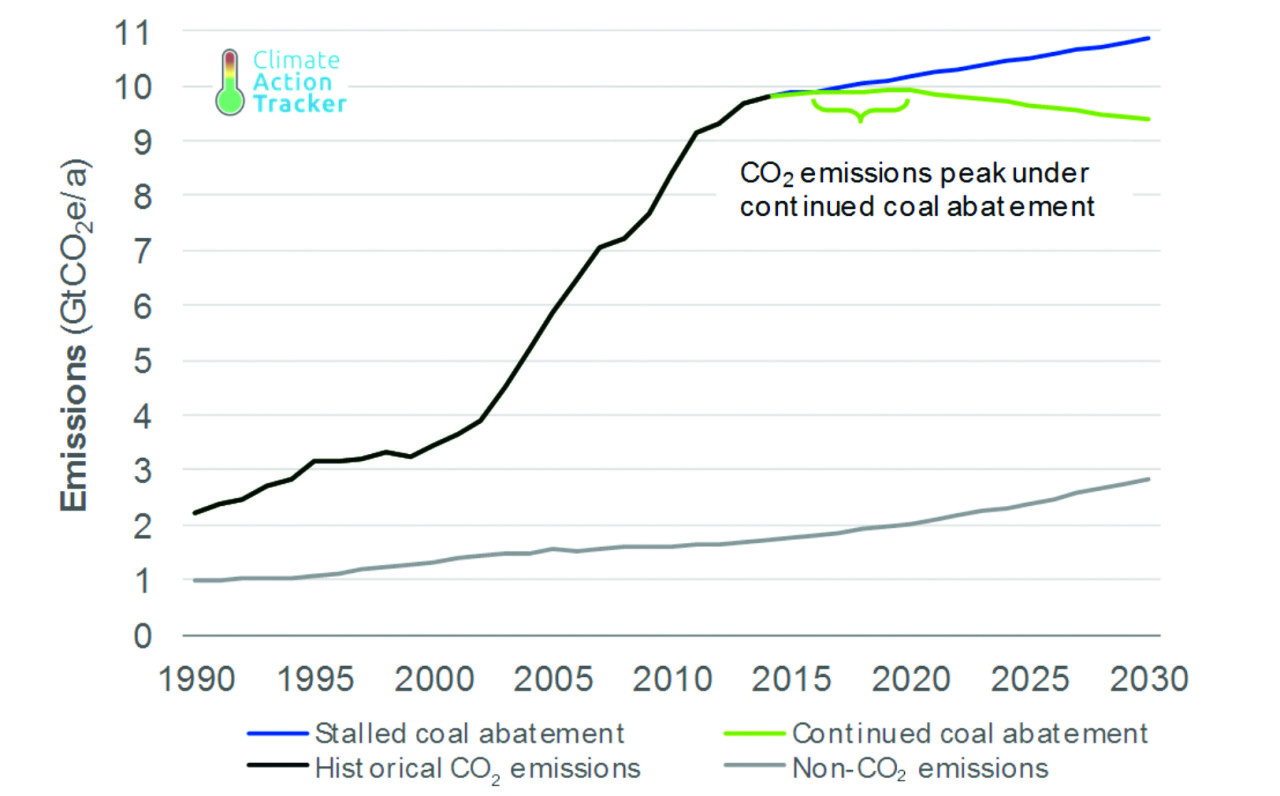 Top governmental bodies in China in December approved plans for a carbon trading system that will first target power plants and then cover most of the nation’s mammoth industrial body.

President Xi Jinping first hinted the country was considering a nationwide cap-and-trade structure in September 2015, and later that year, in a joint climate agreement with the U.S., the Chinese government pledged that the nation’s carbon dioxide (CO2) emissions would slow and peak around 2030. Though it has been slow to develop, a national emissions trading system (ETS) will make China the first large economy poised to implement a carbon market. And while it isn’t clear when trading could begin, China’s ETS could also be the largest in the world—possibly twice as large as the European Emission Trading Scheme, which covers power generation and heavy industry.

China’s plan rolled out in December seeks to expand on pilot initiatives implemented since 2013 in Beijing, Shanghai, Tianjin, Chongqing, and Shenzhen as well as Hubei, Guangdong, and Fujian provinces. Initially, the carbon market will apply only to emissions from power plants producing more than 26,000 tons of CO2 per year—which includes 1,700 facilities that are responsible for about 33.9% of China’s total emissions, according to the China Carbon Forum. While the cap at launch will likely be high, all plants will need to be verified and monitor their emissions. That will at least allow the government to accurately measure emissions from its power sector, the forum noted.

China surged past the U.S. to become the world’s biggest carbon emitter in 2005, and emitted 9,200 million metric tons in 2016, roughly 80% more than U.S. emissions of around 5,000 million tons. But the U.S. per capita CO2 emissions (15.4 metric tons) in 2016 were still more than twice as great as China’s (6.4 metric tons), owing to a 4-to-1 population disparity, according to the Carbon Tax Center, a U.S.-based think tank that promotes carbon pricing.

Many industry observers point out that China has implemented significant policies to address carbon emissions. One has been to cap coal’s share to 58% in total primary energy consumption by 2020, banning new coal-fired power plants until 2018, and shutting down coal plants to combat air pollution. Independent climate data aggregator Climate Action Tracker noted in November that China’s CO2 emissions appear to have already peaked—more than a decade before its 2030 pledge. If China continues to abate coal, decreasing coal consumption as it has every year since 2013, CO2 emissions could mirror 2015 levels (Figure 1).

“However, total [greenhouse gas (GHG)] emissions are likely to continue increasing until 2030, as China has not yet implemented sufficient policies addressing non-CO2 GHG emissions (CH4, N2O, HFCs etc.), although the rate of increase of total emissions would become near-zero under the most optimistic assumptions of continued coal abatement (at an average growth rate of 0.3%/year in total GHG emissions between 2017 and 2030).” The organization noted that further policy action may be expected to address non-carbon emissions as well.

Whether a nationwide carbon trading system will succeed has also been widely questioned. China’s own pilot markets have reportedly suffered from over-issued emission permits and low prices. Many experts also cited complexities involved in putting a large trading system in place, pointing to several collapses of the European Union’s ETS, which resulted in an ineffective cost of allowances for nearly a decade. In November—after two and a half years of negotiations—the European Parliament, Council, and Commission finally reached a consensus on how ETS rules should change in the next trading period (2021–2030) to help the bloc deliver on its target of cutting GHG emissions by at least 40% by 2030, as agreed under the 2030 climate and energy framework and the Paris agreement.