Chevron is poised to acquire an equity interest in the Advanced Clean Energy Storage project, a developing green hydrogen hub that could support more than 1 GW of electrolysis facilities and store 5,500 metric tonnes of their produced green hydrogen in salt caverns near Delta, Utah.

The integrated energy giant on Sept. 9 announced that it agreed, through its Chevron New Energies division, “on a framework” to acquire an equity interest in ACES Delta, a 2019-formed joint venture between Mitsubishi Power Americas and Magnum Development that owns the Advanced Clean Energy Storage project. Chevron, Magnum, and Mitsubishi Power are currently negotiating definitive documentation outlining Chevron’s participation in the joint venture.

The development is another notable sign of progress for the green hydrogen hub, which Mitsubishi Power (then known as Mitsubishi Hitachi Power Systems) and Magnum unveiled in 2019. The project essentially comprises a series of facilities above and within the Magnum Salt Dome, a geologic formation that was tectonically developed from a bedded salt deposit, and which seismic mapping suggests measures at least one mile thick and about three miles wide. Magnum already currently operates five salt caverns at the formation for liquid fuels storage.

Magnum has suggested future facilities at the site could help create a “Western Energy Hub”—essentially by utilizing a series of mined caverns capable of storing hydrogen, natural gas, compressed air, and liquid energy products underground. Mitsubishi Power, meanwhile, envisions that the project will use excess electricity from the western U.S. to produce green hydrogen and store it in those caverns. The project’s first power-generating customer could be the much-watched 840-MW Intermountain Power Project (IPP) nearby in Millard County, Utah, a project for which Mitsubishi Power is supplying hydrogen-capable gas turbines that will combust a mixture of 30% hydrogen and 70% natural gas when IPP commercially starts up in 2025. Mitsubishi Power has said other projects at the site will include the expansion of green hydrogen supply to other Western states and the construction of connecting hydrogen infrastructure to build a regional hydrogen production, transportation, and supply network.

Chevron, Magnum, and Mitsubishi Power said in a joint statement on Thursday that Chevron will bring its “footprint and expertise” in the transportation and industrial sectors to the project. Chevron is already working to “build demand for hydrogen—and the technologies that support it—in heavy-duty transportation and industrial sectors in which greenhouse gas emissions are hard to abate,” the company said.

For Chevron, the potential to partner on the Advanced Clean Energy Storage project presents “an exciting opportunity” that would “provide a scalable platform” to supply its customers with “affordable, reliable and ever-cleaner energy,” said Jeff Gustavson, president of Chevron New Energies, a division that he said the oil and gas giant created “to grow new competitive business lines in areas like hydrogen.”

Chevron’s participation, however, provides a new financing dimension for the green hydrogen hub. When launched in 2019, the project was estimated to cost $1 billion.

The Department of Energy (DOE) Loan Programs Office in May reportedly invited the project’s developers to submit a Part II Application for up to $595 million under the Title 17 Innovative Energy Loan Guarantee Program. Haddington Ventures, a financial advisor for the project and Magnum’s equity sponsor, said that if the application was successful, the project would enter due diligence for the potential loan guarantee. A spokesperson, however, did not respond to questions about the project’s potential costs and timeframe for initial commercial deployment.

The company’s potential hydrogen hub project list has expanded dramatically since it launched the Advanced Clean Energy Storage Project in 2019, it noted. In May, Mitsubishi Power Americas reached a strategic partnership agreement with Houston-based commercial brine producer Texas Brine that provides salt dome rights that position Mitsubishi Power to develop green or blue hydrogen hubs in New York, Virginia, Louisiana, and Texas. And in June, Mitsubishi Power Americas sealed a joint development agreement with infrastructure development company Bakken Energy to create a hydrogen hub in North Dakota comprising facilities that produce, store, transport, and consume blue hydrogen. “The hub will be connected by pipeline to other hydrogen hubs being developed throughout North America,” the company said.

The company also has joint development projects with Entergy in the Gulf Coast and with Puget Sound Energy in the Pacific Northwest to develop hydrogen strategies and projects. Along with hydrogen gas turbine orders for IPP, the company has also snagged hydrogen integration contracts with Capital Power in Alberta, and independent power producers Agate Power’s Danskammer project in New York, Balico’s Chickahominy project in Virginia, and Advanced Power and Emberclear’s Harrison project in Ohio. 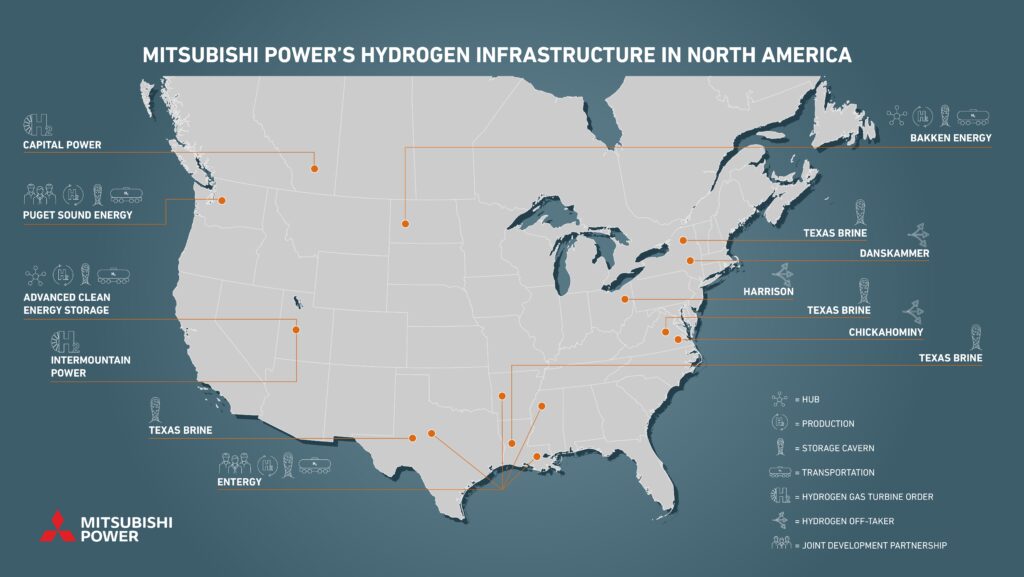