Use of natural gas for power generation in the U.S. is skyrocketing. From 2005 to 2015, the share of energy produced from gas has increased over 80%, with gas now comprising about 35% of the fuel mix. This rapid escalation in dependence on gas presents challenges for generators, independent system operators (ISOs)/regional transmission organizations, and regulators.

Perhaps the most salient issue is how to maintain reliability and limit price spikes in areas like the Northeast on cold winter days. On such days, gas pipeline capacity is often constrained and gas utilities and power plants compete for limited supplies. Considerable efforts are being made to manage these challenges—increased coordination, pay-for-performance standards, and innovative pipeline funding reforms—but success on these initiatives requires navigating through stakeholder resistance, a maze of regulatory complexities, and other obstacles.

In response to strong gas industry opposition, however, FERC withdrew a proposal that would have aligned the nationwide Gas Day with the electric operating day. FERC’s objective was to relieve gas-fired generators that have committed across a single electric operating day from having to procure gas supply and schedule gas transportation across two Gas Days. It also was intended to address difficulties arising from the fact that the start of the Gas Day occurs in the middle of the morning electric load ramp. This initiative was challenged on various grounds, including that it would increase costs, harm reliability of gas service, raise safety issues, and cause operational problems.

Second, ISO-New England (ISO-NE) and PJM Interconnection (PJM) have modified their respective capacity markets to reward generators that reliably deliver power during tight system conditions and more strongly penalize those that do not. ISO-NE has redesigned its market to correlate a generator’s capacity payments to performance during scarcity conditions through adoption of a two-settlement process, with the objective of providing incentives for generators to pursue cost-effective measures to ensure they have the fuel to come online when needed.

The redesign has been challenged as, among other things, unnecessary and unduly risky, saddling consumers with unnecessary costs, discouraging investments, encouraging generators to add oil-gas fuel-switching capability to the detriment of environmental goals, and discriminating against resources without quick-start capability. Pending the outcome of litigation, the redesign is scheduled for implementation in 2018.

PJM is phasing in a new Capacity Performance Resource product, aimed at improving incentives to deliver energy reliably. Capacity Performance Resources will be subject to charges for poor performance and eligible for credits for superior performance. Like ISO-NE’s redesign, numerous parties are opposing PJM’s initiative on a variety of issues, including costs to consumers and discriminatory treatment favoring certain resources. Subject to the outcome of litigation before FERC and likely the court of appeals, PJM’s program will be fully implemented by the end of 2018.

Third, pipeline companies Kinder Morgan and Spectra are relying on an innovative strategy to develop projects they say are needed to supply the New England market: They are seeking long-term firm transportation agreements, not just with prospective shippers on their pipeline projects, but also with electric distribution companies (EDCs).

The theory behind these arrangements is that although EDCs have no need for pipeline capacity themselves, they can release the capacity in the secondary market to meet the needs of gas-fired generators on which they depend for reliability. The pipelines seek EDC contracts because generators are unwilling to enter into the long-term agreements needed to finance a pipeline project. To control costs and enhance their own competitiveness, generators typically rely on less-expensive interruptible pipeline service or unneeded firm capacity re-sold in the secondary market.

The Massachusetts Department of Public Utilities has approved the concept of EDC contracts, and proceedings are under way in other New England states to do the same. EDC contracts are, however, controversial. Detractors assert they unfairly favor gas-fired generation and can subject consumers to unnecessary costs. Critics further contend that reliability concerns can be better addressed with more efficient utilization of existing resources. Like the ISO reforms discussed above, any EDC contract filed for state commission approval appears destined for litigation.

How these issues and proceedings are resolved will go a long way toward determining the effects that increased reliance on gas-fired generation will have on reliability, prices, and the operation of the markets. They may well determine how large a role gas will play for many years to come. ■ 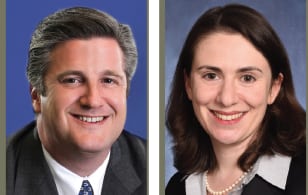