Renewable energy projects often reflect the character of the local economy and locally available natural resources. Solar energy power generation systems are a natural for the Southwest but are less applicable in the more-cloudy and congested Northeast. The southeastern U.S. lacks the wind velocity profiles to justify installation of wind turbines, the flowing rivers required by hydroelectric projects, and the geysers essential to geothermal power. Mother Nature didn’t consider state boundaries when distributing her natural resources. Nevertheless, many regions are getting creative about developing renewable energy generation projects that support the local economy and make the most of available resources.

Take Vermont, for example. Think of Vermont’s bucolic landscape and you may visualize dairy farms. But what you may not envision—because only 2% of the U.S. population is now involved in farming of any type—are the economic challenges that dairy farmers face, including issues of manure disposal, rapidly increasing costs of bedding material, and the rising cost of electricity to operate the business. Dairy farming is capital cost intensive, and limited land availability makes expanding many of Vermont’s family farms impossible or cost prohibitive. Diversification of the product line and more efficient internal operations are the keys to continued dairy farm profitability.

And that’s where a new program at Central Vermont Public Service (CVPS) fits into the picture. CVPS Cow Power, as the program is called, promotes development of and reliance on renewable energy in Vermont by creating a market for energy generated from a renewable biogas fuel derived from cow manure.

Central Vermont Public Service is a small utility serving about 158,000 customers in Vermont principally through long-term contracts with Vermont Yankee and Hydro Quebec (54% nuclear and 38% hydro). Another 6.5% of its customers’ power needs are served by 20 small hydro stations owned by CVPS. Most of the remainder is delivered by independent power producer contracts, most involving renewable sources. A new addition to the CVPS renewable portfolio is power generated by biogas that’s derived from digested cow manure at several large dairy farms (Figure 1). 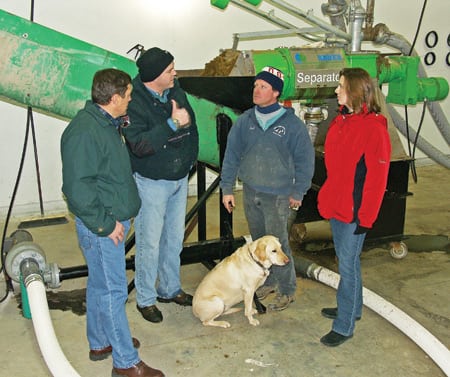 1. Tanks for the manure. Steve Dvorak (far left), who designed the digester at Blue Spruce Farm, Dave Dunn, Earl Audet (with Sierra at his feet), and Melissa Dvorak discuss the separation process, which divides liquids from solids after the manure spends 21 days in the digester. Courtesy: CVPS

The gaseous engine fuel comes from manure and other farm waste held in a sealed concrete tank at the same temperature as a cow’s stomach (approximately 101F) for about 21 days. Bacteria digest the volatile components, creating methane while killing pathogens and weed seeds. The methane is then piped to a modified, naturally aspirated engine-generator (Figure 2). 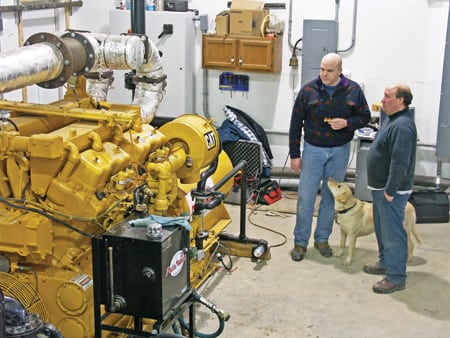 Several dozen farms across the United States are now generating electricity in this way, but CVPS Cow Power was the first program designed to support this effort by linking local customers and producers in an entirely new farm-to-market model and by providing cash grants to defray the costs of interconnection to the rural grid.

By enrolling in CVPS Cow Power, retail customers help support Vermont dairy farms develop biogas-fueled generators, renewable generation in the region, and incentives to farmers for getting into the business. These farms are significant customers for CVPS, so helping them improve their financial strength is good for the local economy as well as the utility.

The program has garnered strong public support: More than 4,570, or 2.8%, of the company’s customers participate. CVPS expects to have 5% of its customers enrolled by year-end 2010. “Our goal has been to make CVPS Cow Power one of the top 10 programs in the country by year-end 2010, and we are well on our way toward meeting that goal,” CVPS President Bob Young said. “Customers continue to enroll by the dozens each week, voting with their energy choice for Vermont farming, an improved environment, and renewable energy production.”

Green Mountain College, known for its emphasis on the environment and energy sustainability, has committed to purchase 50% of its main campus’s electricity as Cow Power and 100% on all its other accounts, which include the president’s house, the college farm, the college inn and alumni house, and an off-campus residence hall in Killington, Vt. The college’s total Cow Power purchases will eventually rise to approximately 1.2 million kilowatt-hours annually.

“This is a great step for us toward a sustainably powered campus,” said Provost Bill Throop. “We are very happy to be supporting not just renewable energy but also the regional economy and the family farms that are so important to the Vermont way of life. It is a good fit with our mission, and departments across campus are supporting the project from their own budgets because they feel it’s a priority.”

Customers may choose to enroll 25%, 50%, or all of their electricity purchases in the Cow Power program, which adds a 4-cent premium per kWh. Customers using 500 kWh per month who buy 25% of their electricity under the rider pay only an additional $5 a month. At 50% Cow Power, those customers would pay an additional $10. Farmers receive 95% of the hourly market price for the energy they generate, plus the 4-cent premium paid by tariff customers for the value-added attributes of Cow Power.

Customers enroll for a variety of reasons. Some want to reduce their reliance on nonrenewable energy, so providing them with a renewable energy choice is important. Others want to support Vermont agriculture or reduce environmental impacts.

Regardless of the reasons customers enroll, Cow Power provides several benefits to participating farmer-generators. Chief among them is a new, steady income stream that offsets fluctuations in milk prices. Farmers also benefit by using excess heat from the engine-generator to heat water and provide space heating, thereby saving $10,000 to $15,000 annually in offset fuel purchases.

Anaerobic digesters also solve another problem: manure management. Manure can be processed through a mechanical separator, and then the solids can be dried and used to replace sawdust or sand as bedding for the animals, because pathogens are killed during digestion. That use alone saves $80,000 to $150,000 annually for participating farms. Any solids not used for bedding may be further processed and sold to the public or garden centers as a soil amendment or garden compost, providing an additional revenue stream. Taken together, these are enormous benefits in a state with a major farm economy (Figure 3). 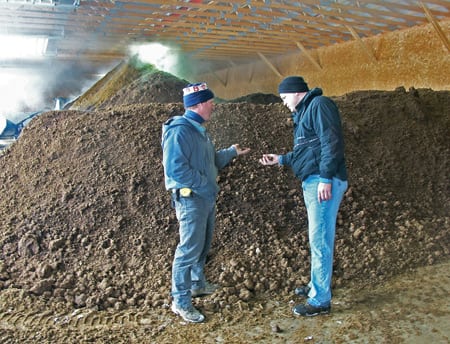 3. Recycling solids. Earl Audet (left) and David Dunn examine some of the dry solids left over from the manure digestion process at Blue Spruce Farm. The solids, which resemble peat moss, are used as bedding for the cows, saving over $100,000 annually on sawdust. Courtesy: CVPS

Cow Power even improves air quality. The digestion process removes the odor normally associated with spreading the liquid portion of manure on crop fields as fertilizer. That reduces the impact on aquatic organisms should an accidental manure spill or unintended runoff into a body of water occur. Neighbors within smelling distance appreciate the use of the naturally odorless liquid manure.

If no RECs are available in the regional market for 4 cents per kWh or less, CVPS deposits Cow Power payments into the CVPS Renewable Development Fund. This fund, overseen by an independent board, provides project coordination support and incentives to farmers to stimulate further renewable farm generation development in the CVPS service area.

Four farms are now each producing between 1.2 million and 3.5 million kWh a year of Cow Power. Several other farms are in various stages of planning to join the program and are expected on-line over the next two years. All CVPS farms received grants from the CVPS Renewable Development Fund and are enjoying support from the U.S. Department of Agriculture and state agencies in the form of additional grant money that covers only a portion of the capital costs of a project.

CVPS Cow Power has received the Vermont Agency of Agriculture, Food and Markets’ Commissioner’s Choice Seal of Quality and is one of the fastest-growing renewable energy programs in the country. It’s also among the most unique. In January, the program, in partnership with the first Cow Power producer, the Audet family’s Blue Spruce Farm, received the Vermont Governor’s Award for Environmental Excellence, the state’s highest environmental honor. Blue Spruce Farm has 950 milking cows producing approximately 24 million pounds of milk a year. It also produced 1.3 million kWh in 2006.

“Through their partnership, the Audet family and Central Vermont Public Service have given new economic hope to many of our Vermont farms while providing customers a fully renewable energy choice,” Vermont Governor Jim Douglas said. “In creating CVPS Cow Power, the company built an entirely new economic and environmental model for manure management, and the Audets were brave enough to become pioneers and prove that it would work. Together with the 4,570-plus customers who have enrolled, CVPS and the Audets have shown the way for the many farmers who will follow their lead.”

Other utilities are taking note of CVPS’s leadership. Two of Vermont’s larger utilities are studying the possibility of using CVPS Cow Power as a template for their own renewable choice programs.