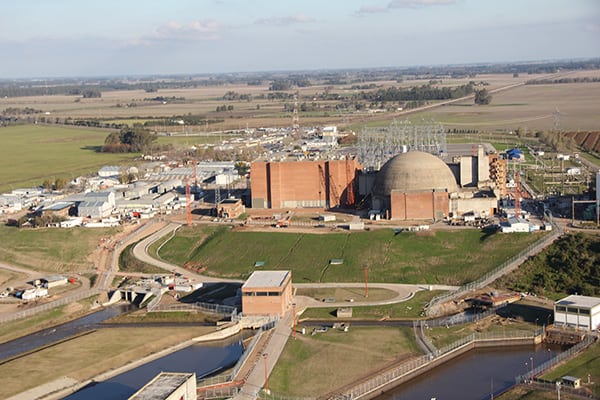 Begun with grand ambitions in the early 1980s, the second unit at Argentina’s Atucha site ran smack into the country’s economic crises in the following decade. But a determined crew brought the project to completion after a 13-year hiatus through a focus on rebuilding the nation’s nuclear labor force.

As with many other nations in the developing world, Argentina has seen the course of its nuclear power program rise and fall with the country’s economic and political fortunes. Argentina first turned to nuclear power in the 1960s, and the country’s first nuclear reactor, Atucha I, entered commercial operation in 1974 at a site near Lima on the banks of the Parana River about 100 kilometers (km) northwest of Buenos Aires.

Atucha I is a 357-MW pressurized heavy-water reactor (PHWR) built by German firm Kraftwerk Union (KWU), which at the time was a joint venture composed of the nuclear business units of Siemens and AEG. In the 1970s, the military government decided to bring four more nuclear reactors online between 1987 and 1997. Siemens, which had by then bought out AEG’s shares in KWU, submitted a design for a second, 745-MW PHWR at the Atucha site.

As originally intended, Atucha II was to be built by a joint venture between KWU and the Argentine Atomic Energy Commission (Comisión Nacional de Energía Atómica, CNEA), using a Siemens-KWU design that was essentially a larger version of Atucha I.

Construction began in 1981, but ongoing weaknesses in the Argentine economy meant that funds for the project were limited. Following the overthrow of the military government and the return to democratic elections in 1983, construction slowed even further as national attention was pulled away by more pressing issues.

Between 1983 and 1994, the project proceeded in fits and starts as funds became available. Construction on some of the main buildings advanced, and materials were stockpiled on site. Though more significant progress was made between 1991 and 1994 as more funds were allocated, the project was finally halted in 1994 with the plant about 81% complete. The main buildings had been erected, but very little electromechanical work had been completed.

In 1994, a new entity, Nucleoeléctrica Argentina (NA), was set up to take over nuclear development from CNEA. But ongoing challenges in the national economy meant there were insufficient resources to complete Atucha II at the time.

In the intervening years, the site lay idle as the workforce dispersed and the local construction and engineering expertise that would be necessary to complete the plant waned. Siemens finally withdrew from the project in 2000. Meanwhile, a skeleton staff of about 150 worked to preserve 40,000 tons of materials—comprising 85,000 separate items—that were stored at the site and other locations.

During the late 1990s, Argentina’s economy continued to contract as a result of internal and external factors, culminating in an economic crisis that began in 1998 and reached its worst in late 2001, when the government defaulted on its public debt and riots wracked major cities for weeks. Not until the election of Néstor Kirchner in 2003 and major changes in economic policies were enacted did the nation begin to recover.

By 2006, Argentina was finally back on its feet and experiencing economic growth. That August, the government announced a $3.5 billion plan to revitalize the country’s nuclear sector, which included $600 million for completing Atucha II. Argentina’s desire to increase the share of nuclear in the power mix and reduce dependence on imported fossil fuels—especially natural gas—lay behind the decision.

But restarting the project after more than a decade was a significant challenge for a variety of reasons. NA, which would serve as the architect-engineer and design authority, needed to close out the original contract with Siemens-KWU and obtain the intellectual property rights for the design in order to finish the work. More significantly, it needed to rebuild the local workforce.

NA formed cooperative agreements with Argentine companies and institutions as well as foreign organizations such as the International Atomic Energy Agency, Siemens, and AREVA. To staff the project, available personnel who had worked on the plant originally were called back, and new engineers, technicians, and construction workers were recruited and trained alongside the veterans. Construction resumed in November 2006.

Because so many new workers with so many different skills needed to be brought in, a special committee was formed to identify all specific labor needs and determine how they would be filled. In addition, construction tasks were broken down into four levels of expertise—from construction of the pressure vessel and primary piping, requiring the highest qualifications, down to basic construction tasks—to ensure labor resources were allocated most efficiently.

NA worked directly with the local unions and contractors to structure the construction contracts and develop a sufficiently flexible process to support on-the-job training. Among other achievements, more than 1,400 new welders were trained and qualified as part of the project. Personnel on site rose from a few hundred to more than 5,000 within two years, peaking at nearly 7,500 in 2010.

Another challenge was refurbishing the partially finished plant so that construction could resume safely and effectively. The communications and data processing networks had to be updated to support new standards (Figure 1). Temporary power, water, security, and sewage systems, as well as other temporary facilities that had lain idle for more than a decade, had to be cleaned up, reconditioned, and integrated with new facilities to support construction.

Electromechanical construction resumed in mid-2007. The heavy-water design required 600 metric tons of heavy water, which was produced at the country’s indigenous heavy water production plant in Arroyito. Production of heavy water was completed in June 2012. Primary system pressure testing was conducted in early 2013, and fuel and heavy water were loaded into the reactor later that year. First criticality was achieved in June 2014, and 100% power was achieved for the first time that November.

Ultimately, more than 43 million construction man-hours, of which 99% were local, would be expended in completing the plant.

Atucha II, now named for former president Kirchner, was declared commercially operational by his widow, current President Cristina Fernández de Kirchner on February 19, 2015. In opening the plant, she hailed the work done by Argentine firms and labor in completing the project.

“To those who some days ago were doubtful of the agreements we went to sign in order to make our economy grow and attract new investments, I want to say that all the work for this nuclear plant was done by Argentine people, Argentine brains, Argentine labour, because, you know something? We, the Argentine people have begun once again to go down a path that we had abandoned,” Kirchner said.

“In the nineties, Argentina—partly, it is fair to say, because of external pressure—abandoned its role as the most important nuclear actor in Latin America. Today, we are reclaiming that role by fully opening this plant.”

The success in completing Atucha II has indeed given renewed momentum to Argentina’s nuclear sector.

Two more units are planned at the site, with construction tentatively slated to begin in 2016 and 2017. The country has signed cooperation agreements with Russia and China for future nuclear development, including possible reactor construction.

Finally, Argentina is arguably furthest along with small modular reactor development, with its 25-MW CAREM design—nearing completion at the Atucha site and set to begin testing next year. (For more on CAREM, see “Small Modular Reactors Speaking in Foreign Tongues” in the January 2015 issue.) ■