The Clean Coal Power Initiative (CCPI) was devised to incubate and demonstrate more-efficient clean coal technologies that would be usable by new and existing U.S. power plants. It was hoped that by merging public- and private- sector interests, the program would benefit air quality, enhance grid reliability, help to reduce electricity prices, and improve U.S. energy security.

The CCPI is a 10-year, $2 billion program based on industry/government cost-sharing. It is part of President Bush’s "Clear Skies and Climate Change" directive to reduce power plant emissions by 70% by 2018. The program is managed by the DOE’s Office of Fossil Energy and implemented by the National Energy Technology Laboratory. To date, the DOE has announced two separate CCPI rounds, totaling 12 projects.

In January 2003, then-Secretary of Energy Spencer Abraham announced that Boston-based NeuCo Inc., a developer and vendor of plant optimization software, would spearhead one of the eight selected projects in the initial phase of the CCPI. All eight first-round projects had the same goal: to reduce the air pollution or greenhouse gases emitted by a test plant by optimizing its efficiency. But NeuCo’s was the only one that did not entail the addition of process equipment to the test plant. It instead would deploy and demonstrate an integrated, software-based optimization solution at Houston-based Dynegy Inc.’s Baldwin Energy Complex, a three-unit, 1,768-MW coal-fired power plant in Baldwin, Ill. (Figure 1). 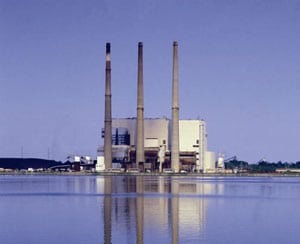 According to Curt Lefebvre, president and CEO of NeuCo, "The systems’ expected benefits include reduced NOx emissions, improved fuel efficiency, and increased availability." Lefebvre explained that the improvements in fuel efficiency are expected to provide commensurate reductions in the output of greenhouse gases, mercury, and particulates. "When completed, this installation will represent the first time that multiple optimization software modules of this breadth have been integrated into a computerized process network of a power plant,"he said.

Lefebvre told us he is proud of the work his company is doing with Dynegy and the DOE. "The CCPI simultaneously takes on two big national challenges—ensuring the reliability of U.S. electric supply and environmental protection. Because the solutions to be developed by this project will enable generators to reduce both their costs and their plants’ emissions, they will meet the program’s stated goals and should provide huge benefits both to the industry and the public."

NeuCo is shouldering 55% of the Baldwin project’s $19 million cost. The DOE’s subsidy of the remainder will be repaid from sales of commercial products NeuCo expects to develop based on experience gained during this project.

Now in its second year of implementation, the Baldwin project has begun to produce results. In year one, a combustion/post-combustion (SCR) optimization system—called CombustionOpt—was installed on the cyclone boilers powering Units 1 and 2. This project faced many challenges, among them avoiding problems associated with sub-stoichiometric combustion (including waterwall corrosion, cyclone plugging, and increased loss-on-ignition) while leveraging overfire air, side-to-side biasing, and top-to-bottom and primary/secondary air (Figure 2). The system also had to find a way to exploit cyclone-specific fuel and air measurements and manage year-round SCR operations without the benefit of automated control of the unit’s ammonia injection grid—not to mention meet plant economic objectives that depend on market conditions. 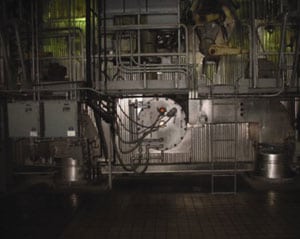 This stage of the project had three ambitious goals: simultaneously reduce NOx emissions and reagent (ammonia) usage of Units 1 and 2, increase the efficiency of their SCR systems through more balanced combustion, and operate the SCRs closer to their design point. CombustionOpt achieved all three objectives. It proved able to continuously tune certain biases and trims within the units’ distributed control systems (DCS) that operators normally are too busy to focus on by exploiting directional knowledge in neural models between these moves and emissions responses. The software also proved capable of handling complex, dynamic, nonlinear processes despite noise and missing inputs.

Bottom line: Units 2 and 3 saw their ammonia consumption and stack and SCR-inlet NOx levels drop when CombustionOpt was activated for the first time (Figure 3). Since then, models for controlling individual cyclone stoichiometries have been added to CombustionOpt, and they have succeeded in further reducing NOx levels—and slagging as well—by controlling fuel-air ratios more tightly than the units’ DCS can.

3. Getting down. The red and blue lines indicate the NOx levels at the inlets to Unit 1’s A and B SCR systems, respectively. Note that when CombustionOpt was activated, the levels not only fell substantially (15% to 20%) but also became less variable. Courtesy: NeuCo

According to Sam Krueger, managing director of the Baldwin Energy Complex, "The CombustionOpt system, operating on the cyclone-fired boilers, has helped plant personnel develop additional insight into the interactions of fuel and air to control NOx emissions and cyclone slagging." As part of the project, NeuCo used an in situ LasIR Tunable Diode Laser ammonia analyzer from UniSearch Associates Inc. (Concord, Ont.) to help model NH3 slip as a function of CombustionOpt’s fuel and air bias variables.

While CombustionOpt was doing its thing on Units 1 and 2, Dynegy was installing another NeuCo optimization system—called SootOpt—on Unit 3, the one powered by the tangentially fired boiler. As its name implies, SootOpt is designed to optimize sootblowing operations. It can do so based on unit-specific objectives for emissions (lower levels of NOx, opacity, and CO) heat rate (lowering Btu/kWh by more tightly controlling reheater and superheater temperature), and O&M costs (reducing them by decreasing tube wear and thermal stress).

The SootOpt system uses a combination of optimization methods, backed by direct measurements and local controls, to establish sootblowing requirements and relate boiler cleaning actions to the objectives of the unit on which it is installed. It leverages user-defined operational constraints and control considerations to identify responses to different operating conditions (such as when more sootblowing is required as a result of boiler operation at higher temperatures). SootOpt’s adaptive models can simultaneously optimize a boiler’s NOx output and heat rate and minimize slagging and wear and tear of equipment within it within defined boundaries.

On Baldwin Unit 3, the initial effort focused on configuring SootOpt to better leverage the power of the unit’s Diamond Power/ASI Intelligent SootBlowing (ISB) system. SootOpt now dynamically adapts the cleanliness factors used by the ISB system for local control of water cannons in the furnace, as well as sootblowing actions in the convection backpass.

Early results indicate that SootOpt has had a positive impact on steam temperatures, unit heat rate, and boiler NOx production (Figure 4). For the same steam flow, less heat now is being absorbed by the furnace and more by the superheater and reheater sections. In general, SootOpt has reduced the flux targets for both the upper and lower furnace area. Although stack NOx is not an explicit objective for SootOpt, levels of that variable have been noticeably lower and sustained.

The initial implementation of SootOpt was limited to applying optimal cleanliness factors for the furnace, because an outage would have been required to install additional temperature sensors in the convection backpass. When an outage recently occurred, the sensors were put in. Work is now under way to integrate them with both the ISB system and SootOpt. Once the hookups are made, CombustionOpt will be installed on Unit 3.

As part of the first stage of the project, Units 1 and 2 also were retrofitted with NeuCo’s PerformanceOpt system. Because it embeds a first-principles–based integrated boiler and steam cycle model within an optimization software framework, PerformanceOpt can monitor unit operations in real time.

Displaying its results on customized screens, the system provides real-time detection of fine-grained efficiency and capacity losses based on model-predicted achievable values under current plant conditions. PerformanceOpt’s home screen (Figure 5) provides current and historical overviews of performance, identifies operational problems, and quantifies their impact on unit capacity and efficiency. The software is smart enough to know whether to take action to fix a problem or recommend having operators investigate it further. 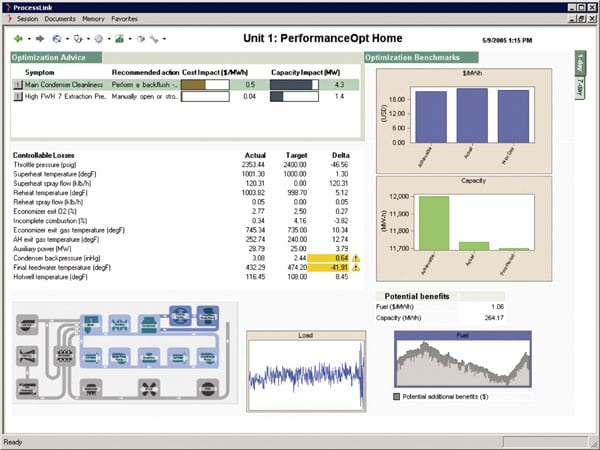 The final technology piece of the Baldwin project is NeuCo’s MaintenanceOpt, which uses a powerful diagnostic knowledge base to determine the root causes of problems that are affecting unit efficiency and capacity. The software also is predictive and capable of differentiating near-term and slow-developing reliability problems. Because the heuristic rules that make MaintenanceOpt an expert forecaster are resident in the ProcessLink platform’s infrastructure and calculation engine, any decisions the software makes can be applied plantwide and in real time.

MaintenanceOpt’s real-time decision-support interface alerts operators to problems requiring immediate or early attention, their causes and remedies, and their impact on unit efficiency and availability. For each problem it detects, the software automatically generates a work order and forwards it to the unit’s computerized maintenance management system.

The version of MaintenanceOpt that was recently installed on Baldwin Units 1 and 2 includes the diagnostic heuristics for a preliminary set of condition variables such as feedwater heater performance, condenser cleanliness, and turbine inefficiencies. Additional condition variables will be added over the next several months.

Ultimately, NeuCo and Dynegy hope to demonstrate the value of approaching plant emissions, efficiency, and availability problems in a real-time, integrated fashion—across many plant systems and generating units. Another goal is to emphasize the key role that advanced information technologies can play in developing competitive business strategies.

"NeuCo’s individual optimization solutions have already proven to be beneficial," said Joe Naberhaus, director of Dynegy’s Midwest Fleet Operations. "As we move into the second half of the CCPI project, the integration and coordination of these solutions will allow us to continue our commitment to reducing emissions while improving our operating efficiency and reliability."

According to NeuCo’s Lefebvre, "The CCPI project will demonstrate that multiple optimization products and technologies, each working to optimize critical pieces of equipment, can be integrated into a single software architecture and coordinated to achieve common goals. It will lay the foundation for future fleet-level optimization initiatives."