The industry is preparing for carbon legislation by exploring options for dealing with CO2. But even if the technical issues are resolved, actually sequestering CO2 poses a number of other daunting challenges.

In the U.S., climate change has gone from being an obscure topic to the subject of household discussions in the matter of a few short years. Reflecting the growing impact that carbon constraint issues have had on the electric utility industry, this year’s ELECTRIC POWER conference offered a session titled "CO2 Control Policy Alternatives and Implications," which featured two insightful presentations about this complex topic. The two speakers, Block Andrews, PE, with the Strategic Environmental Solutions Division of Burns & McDonnell Engineering, and Steven M. Carpenter, director of carbon management at Marshall Miller & Associates Inc., took a balanced look at both the progress achieved so far and the technical challenges ahead related to implementing carbon capture and storage (CCS).

"It is likely that some form of global warming legislation will be enacted within the next two years, and the electric utility sector is certain to be impacted," said Andrews. "The legislation could take the form of a carbon emissions tax, taxes on fuels, a cap-and-trade program, or other hybrid combination of programs. The reduction levels that will be required and the timeframe to achieve the reductions are still unknown. With all these uncertainties, utilities still have to provide adequate, reliable, low-cost power to their customers" (Figure 1). 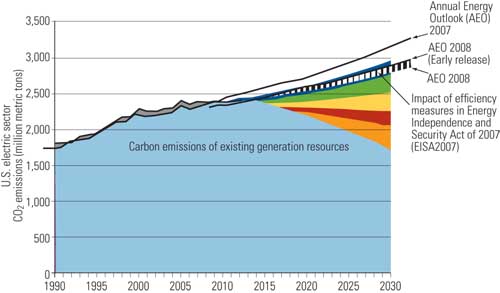 Several of the current CO2 -capture projects that will utilize the greenhouse gas for enhanced oil recovery (EOR) are progressing and are pushing the "commercialization" of several promising CO2 -capture technologies, according to Andrews (Figure 2).

2.    A trio of CO2 capture technologies. Currently, integrated gasification combined-cycle technology is the most likely to become commercially viable within the next six years. Courtesy: Burns & McDonnell

Andrews pointed to a number of realities related to the removal of CO2 through geologic sequestration:

3.    A slow slog. A number of industry analysts predict that geologic sequestration of captured CO2 may not be commercially feasible until almost 2025. Courtesy: Burns & McDonnell

Other Barriers to Success

In his presentation, Carpenter cited many of the same concerns about CCS implementation expressed by Andrews; in addition, he pointed out some other potential roadblocks.

Cost. Carpenter emphasized the estimated cost increase if CCS is widely adopted by the U.S. electric industry in the coming years. "The current average consumer’s power cost is estimated to be 10.6¢ per kWh more than the current cost," said Carpenter. "Another cost is the parasitic load to power plants created by the carbon capture process. One analyst estimates if CCS were implemented through the entire U.S. fleet, that would create a 40-GW parasitic load, which equals 80 new 500-MW plants."

He also noted that the lease costs of storing CO2 under the surface of private landowners’ property is unknown, but could be quite expensive.

Storage Validation. "‘Measure, monitor, and verify’ has become ‘monitoring, verification, and accounting,’" Carpenter said. "In general, there is a lack of geological homogeneity and a lack of federal and international standards."

Standards and Regulations. Carpenter referred to several laws that could potentially govern CCS activities in the future. For example, he cited the Safe Drinking Water Act Class VI underground injection control well regulations. He also mentioned the current House bill (the American Clean Energy and Security Act of 2009), which was introduced recently by Reps. Henry Waxman and Edward Markey. The bill (H.R. 2454) seeks to establish a carbon emissions reduction goal, a cap-and-trade program, and a federal renewable energy standard.

Other unresolved legal issues affecting the future development of CCS projects pertain to the acquisition of geologic storage rights and the creation of sequestration storage fields, according to Carpenter. Either federal or state laws will have to resolve issues related to eminent domain, contractual rights of impacted parties, compulsory pooling, and unitization.

Risks and Liabilities. In addition, he emphasized that new laws and insurance products will need to be developed to deal with the allocation of risk in regard to geologic sequestration. For example, one possible resolution is the government’s assumption of liability for CO2 stored underground and the release of the landowner from liability if the CO2 migrates onto adjacent properties or in some other way causes damage.

The ability to expand CO2 sequestration beyond EOR to include greenfield geological structures, such as saline formations or unmineable coal seams, presents daunting challenges that clearly need to be resolved by additional technological development, public education, and regulatory structure. Successful implementation of CCS also will require that risk issues be identified and risk mitigation strategies developed for project participants and other affected parties. It’s hard to predict how far down the road these goals will be accomplished.