“Once it’s enacted, the impact of climate change legislation on the electric power industry will be ten times bigger than that of the Clean Air Act,” said Dan Adamson, an attorney with the law firm of Davis Wright Tremaine and chair of the opening session at the 2nd Annual Carbon Constraint Conference (Figure 1). 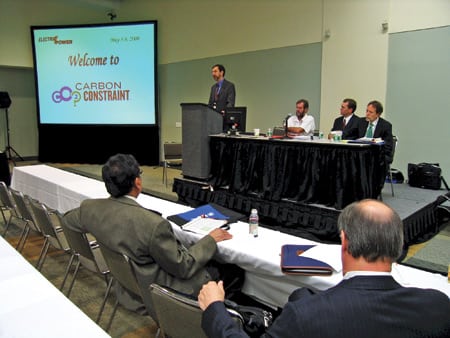 His was just one of many interesting predictions made during the lively presentations and discussions at the event, which is now colocated with the ELECTRIC POWER Conference & Exhibition. This two-day conference focused on the impact of carbon constraint laws and technical solutions for the power generation industry.

Although the panelists all agreed that the current political move toward some type of climate change legislation has created great uncertainty for the utility industry, they expressed a variety of views about the best way for the industry to prepare for the likely implementation of proposed new laws.

National cap-and-trade program on the horizon

The conference began with a focus on the impact of proposed carbon constraint legislation and regulations on the electric power industry. Adamson discussed the Leiberman-Warner bill that was then pending in the U.S. Senate (and that died a month later after a procedural vote in the Senate). The bill, named America’s Climate Security Act (S. 2191), sought to cut total U.S. greenhouse gas (GHG) emissions by as much as 19% below the 2005 level by 2020.

Adamson suspected that the legislation, cosponsored by Sen. Joe Lieberman (I-Conn.) and Sen. John Warner (R-Va.), probably would not pass in 2008 because of the pending presidential election. However, federal climate change legislation could be passed in 2009 or 2010, because the remaining presidential candidates support enacting some type of bill that will control GHG emissions, Adamson said. (For more information on the candidates’ positions on energy policy, see "Not a quarter’s worth of difference.")

The important issues that will have to be addressed in any national cap and trade program set up under federal legislation, according to Adamson, are as follows:

Several other speakers focused on how the possible passage of climate change legislation will have significant consequences for the utility industry in terms of compliance strategies, investment, and the end-user’s power costs.

For example, speaker Kenneth J. Snell, an engineer with Sargent & Lundy, discussed considering the issue of GHG emissions in new source review (NSR) permit applications for power plants. He pointed out that currently existing NSR programs under the Clean Air Act do not effectively address GHG emissions. He said that without comprehensive GHG legislation, permitting options are limited and subject to judicial challenge. During this current period of uncertainty, he suggested, power plant engineers should address GHG emissions in their plants’ NSR permit applications as part of an integrated carbon reduction plan. According to Snell, the goal of any integrated carbon reduction plan should include reducing overall CO2 emissions and reducing overall CO2 intensity (lb CO2/MWnet).

Another session dealt with carbon reduction strategies and planning. Speakers in this session discussed some of the significant technical, economic, and public policy challenges of CO2 capture and storage. One speaker, Grant Grothen, PE, the GHG director of Burns & McDonnell Engineering, spoke about early action incentives that can be used to help cut GHG emissions, such as renewable portfolio standards that mandate utilities to produce a certain specified percentage of their electricity from renewable energy sources such as wind and solar. He also spoke about the importance of state/national tax credits and incentives and energy efficiency rate recovery, which he called the “fifth fuel.”

“Many people in our industry are looking at carbon capture and sequestration as the magic bullet to solve the GHG problem,” said Grothen.

Carbon capture, which is the separation and capture of CO2 from stationary sources like fossil-fired power plants, and carbon sequestration, which is the placement of CO2 into permanent repositories such as geologic formations, are receiving increasing attention as one possible way to way to deal with GHGs. Grothen commented that this approach has the following favorable aspects: the technical feasibility looks good; it offers low statistical risk; and research and development funding support, plus support from politicians, are increasing.

In particular, he stated that using captured CO2 in enhanced oil recovery (which is an established practice) looks promising. The technique involves injecting CO2 as a supercritical gas (1,200+ psi) at oil production sites to release otherwise difficult-to-access oil. Looking into his crystal ball, Grothen predicted that during the next decade carbon capture technology will near commercialization and four to six carbon capture projects supplying CO2 to enhanced oil recovery projects will become operational.

The value of corporate sustainability reporting

A later session addressed the issue of how utilities now are faced with the imperative of establishing effective dialogue with stakeholders on the issue of climate change. Candice Derks-Wood, a sustainability specialist with Burns & McDonnell, spoke about the need for utilities to report to their stakeholders their efforts to maintain sustainable business practices, including their efforts to reduce GHG emissions.

“Sustainability for the utility industry is maintaining a balance between the environmental, social, and economic aspects of operating a business while reliably providing the energy necessary to meet the needs of society,” said Derks-Wood.

Recent coal plant cancellations driven by concerns about the negative effects of GHG emissions have impacted long-term utility generation in the U.S. Currently, the options for electric power generation include traditional coal and natural gas generation, nuclear, and renewable energy, which includes wind, solar, and other alternative sources.

Dr. Justin Zachary, a principal engineer at Bechtel Power Corp. and a POWER contributing editor (Figure 2), discussed how nuclear power and renewables fit into the generation mix. He stated that the utility industry is currently making a strong effort to reduce its carbon intensity. (Part II of Zachary’s review of the technical options for carbon control starts on page 50.) 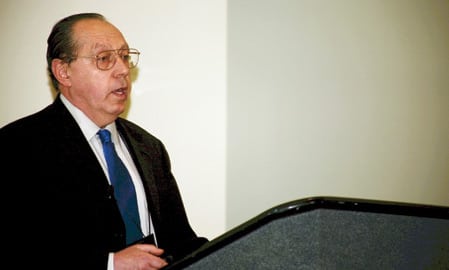 In his presentation, he mentioned that it’s a new landscape for nuclear power. For example, in 2007 the South Texas Project Nuclear Operating Co. submitted to the Nuclear Regulatory Commission (NRC) the first license application for a new nuclear power plant in 29 years. Zachary predicted that by either 2015 or 2016 four to eight new nuclear power plants will be beginning commercial operation.

Zachary also spoke about the pros and cons of different types of renewable energy. He mentioned that experts project that more than $2.4 billion will be invested in renewables in 2008. He mentioned the challenges associated with wind power: supply intermittence, difficulties storing wind energy, and difficulties connecting wind power to the grid. He suggested that the U.S. needs to promote consistent and supportive governmental policies and more investment in research and development of wind power.

Regarding solar power, it has the following significant technical challenges, according to Zachary: developing a concentrated photovoltaic (PV) solar panel, improving efficiency, and reducing solar’s footprint. Likewise, he pointed out that energy generated from marine currents faces some technical obstacles: designing an efficient turbine for ocean power and developing corrosion-resistant materials for the equipment used to harvest this type of energy.

He pointed out that geothermal energy is a mature technology that is being used successfully in Iceland, in particular. The main challenge with it is the expense of drilling, which can be up to 65% of the upfront cost.

Zachary also focused on the high cost of electrical generation from renewables. He pointed out that their main expense is capital start-up costs. For example, installing PV crystalline solar panels can cost an average of $6,000 to $10,000 per kW. Similarly, marine energy can cost as much as an average of $6,000 to $8,000 per kW. In contrast, wind energy is less expensive, averaging $1,000 to $1,500 per kW.

Dr. Charlotte Streck, director of Climate Focus, emphasized another new direction in the power sector: the use of offsets. She said that an offset represents an emission reduction obtained outside of a well-defined cap-and-trade program that can then be used to “offset” increased emission under the cap. She described emission reductions as being calculated against a baseline, with technology benchmarks or performance standards.

Streck pointed to the Kyoto Protocol as an example of international offset standards. Under the Kyoto Protocol (the U.S. is not a signatory to this treaty), the Clean Development Mechanism is an arrangement allowing industrialized counties with a GHG reduction commitment to invest in projects that reduce emissions in developing counties as an alternative to more expensive reductions in their own countries.

She discussed the emerging U.S. federal offset standards as exemplified by the proposed Lieberman-Warner bill. This legislation contains a number of provisions related to offsets. Examples include rules pertaining to non-agricultural-related methane destruction and carbon capture and sequestration. The bill does not include international reduction credits, only international allowances.

As with any new type of program, there can be roadblocks to setting up offset projects, said Streck. For example, technical feasibility may be an issue if, for example, renewable energy projects are unavailable. Likewise, there might be a problem with financial viability if the offset revenue is not significant, depending on the type of project. Other problems can arise related to compliance with offset standards/methodologies and structuring appropriate sales/purchase strategies. She concluded her presentation by emphasizing that offsets are an important component of cap-and-trade systems and are essential to containing costs.

This year’s Carbon Constraint event highlighted the regulatory, technical, and financial demands the utility industry must deal with as it moves into a carbon-constrained economy. Fortunately, the conference provided attendees with insights and strategies to use in balancing these challenges with the need to continue maintaining their facilities cost-effectively.