Denmark has 380 MW of offshore wind capacity—the most in the world. So it should come as no surprise that a Danish company, DONG Energy, is deeply involved in offshore wind project development both at home and in the UK. The company’s projects include construction of the 166-MW Nysted Offshore Wind Farm, located in the Baltic Sea offshore of Denmark, where 72 turbines generate 166 MW in what is the largest offshore wind farm in the world. DONG has several other projects under development, but its latest entry into the market is the Burbo Bank Offshore Wind Farm, which first produced power on July 21 and was commissioned on October 18 (Figure 1). 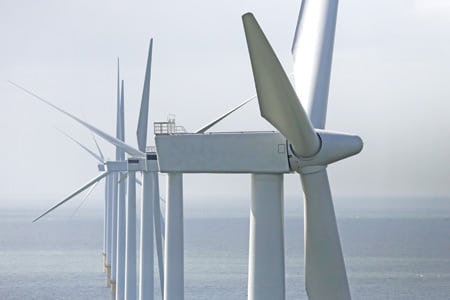 The success of this and other offshore wind projects is nothing to take for granted, as the U.S. experience demonstrates.

The U.S. may have assumed the lead position on the world’s list of installed wind capacity, but we have zilch in the burgeoning offshore market. The University of Delaware recently completed a study that concluded U.S. offshore wind resources from Cape Cod, Mass., to Cape Hatteras, N.Y., could be as high as 330 GW—enough to satisfy all the electricity needs of the nine Mid-Atlantic states with plenty to spare.

Several U.S. projects along the East and Gulf coasts have some momentum, but recent history has shown that much more than location is required to site an offshore wind park. Witness the political and regulatory hurdles still facing Cape Wind, a proposed project off Nantucket Sound in Massachusetts. Parochial interests led by Senator Ted Kennedy (D) have delayed that 420-MW project at every turn. Down the coast, Long Island Power Authority’s Offshore Wind Park, sited along Long Island’s south shore, was cancelled in August because initial cost estimates for the 140-MW project had doubled since the project was announced in early 2005.

The UK also has huge offshore wind potential: Estimates run as high as three times the island’s current power demand. The difference is that the UK has summoned the political will and public support to vigorously pursue its renewable obligations goal of 15% generation from renewables by 2015. The European Union (EU) took that number a step further in its March vote to increase its legally binding target to 20% by 2020. That’s not out of line with the renewable portfolio standards adopted by many American states. The EU countries, and especially the UK, are single-minded in their pursuit of windpower to meet their commitments, and that resolve has attracted developers and billions of dollars in investment.

The UK started small by approving several successful offshore projects limited to 30 turbines. Developers then pushed for lifting the limit on turbines and eagerly anticipated deploying the new, larger wind turbines on future projects. Offshore leases are granted by the Crown Office, which “owns” the offshore up to a 12-mile limit. Once a lease is won in a competitive bid, the developer then must obtain a series of other permits from the same government that is committed to offshore wind power. Disputes tend to be with the local citizenry, over where power cables come ashore and interconnect with a substation.

The second round of Crown Office offshore licenses came with no size limit. London Array, billed as the world’s largest offshore wind farm, just received a green light from the British Government. This 90-square-mile wind farm located off the southeast coast of England is being developed by a consortium of Shell WindEnergy, E.On, and DONG Energy. Their plan is to install about 340 turbines cranking out 1,000 MW—about a quarter of London’s electricity demand. The project is scheduled for completion by 2011—just in time for the London Olympics.

The Burbo Bank installation is the first offshore project using the 3.6-MW Siemens Power Generation (SPG, www.powergeneration.siemens.com) SWT-3.6-107 turbines. SPG supplied and installed the 25 turbines on a 4-square-mile lease in the Burbo Flats in Liverpool Bay at the entrance to the River Mersey, approximately 4 miles from the Sefton coastline. The Burbo Banks, once feared by seamen for strong winds and shallow depths, is an excellent location for a wind farm for those very same reasons (see box). The 90-MW wind farm is operated by SeaScape Energy Ltd., a company owned by DONG.

The power produced by a wind turbine is a function of the wind speed as defined by the turbine power curve (Figure 5). The SPG SWT-3.6-107 wind turbine used at the Burbo Bank Offshore Wind Farm begins to produce power when the wind speed is close to 9 mph and reaches its 3.6-MW design power at 26 to 31 mph. If wind speed exceeds the maximum power generation limit, the turbine controls will slowly rotate or pitch the blades to prevent excessive blade loads. Wind speeds exceeding 56 mph will shut down the turbine for safety reasons.

The average wind speed at Burbo Bank is about 30 mph, and average annual generation is expected to be close to 315 million kWh.

Each wind turbine assembly consists of the turbine, blades, and nacelle; a support tower; and a foundation. Each turbine is configured with a 350-foot-diameter three-bladed rotor with blades 172 feet long (Figure 2). The rotor assembly is connected directly to the gearbox and generator contained in the nacelle and mounted on top of a 210-ft tower (Figure 3). Each tower supporting a turbine is anchored to the seabed by a foundation consisting of a single monopile structure over 16 ft in diameter and over 170 ft tall. The foundation is driven up to 80 ft into the seabed such that it extends 56 ft above mean sea level. The turbines are spaced between 1,750 and 2,400 ft apart. 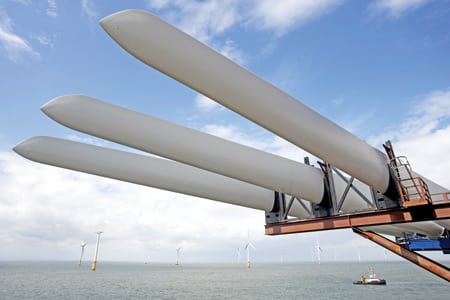 2. A tale of three blades. Siemens uses a three-bladed turbine design. Each blade is over 170 feet long and is connected to the turbine hub at sea. Courtesy: Siemens Power Generation 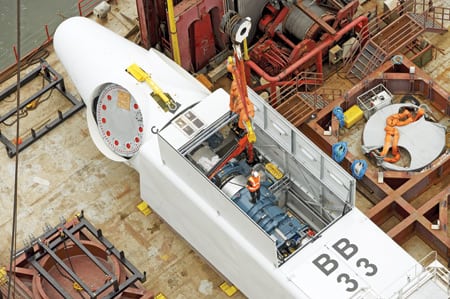 3. Mini power plant. The turbine nacelle houses the gearbox, generator, and controls and was preassembled onshore. The entire assembly was then lifted and attached on top of a 210-foot support tower. Courtesy: Siemens Power Generation

SPG leased an 11-acre parcel in the port of Mostyn, located in North Wales, where preassembly of the turbines began in early May. The turbine parts were carried on the BBC Mississippi from Denmark, north around Scotland, and to Mostyn. The cargo ship was able to pack parts for six and a half complete turbine assemblies per trip; heavy parts were stored under deck and the lighter parts were in racks on the deck.

At Mostyn, the 210-ft steel support towers were preassembled with all the internal and electrical systems and then tested. Purpose-built vessels were used to ferry the towers, nacelles, hubs, and blades to the site, about 4 miles offshore. Each of the turbines required five heavy lifts spaced over half a day. Some lifts were up to 185 tons. Erection of all 25 turbines was completed in only 43 days (Figure 4). 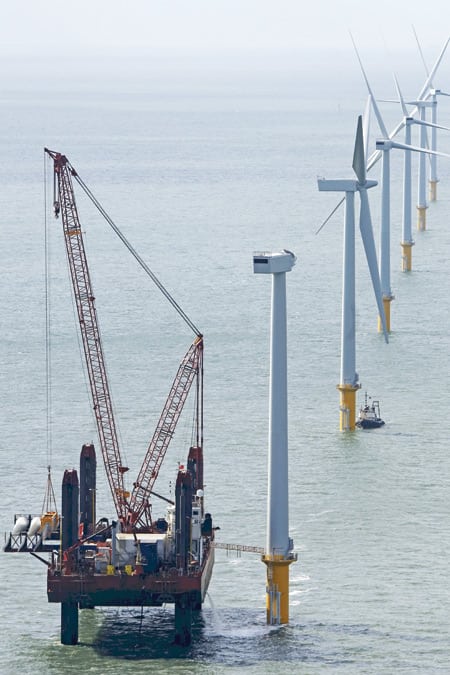 4. Float like a butterfly. A specially built floating crane was used to lift the nacelle, hub, and blades into place. Note that the nacelle is in place and the crane is in the process of lifting one of the three blades. Courtesy: Siemens Power Generation

Power cables, buried under the seabed, interconnect the turbines and the three cables that bring the power ashore and then underground 3 miles to a substation in Wallasey. The substation steps up the generation voltage (33 kV) to a transmission voltage (132 kV) and feeds it into the national electricity grid. The 24 miles of XLPE (cross-linked polyethylene) armored submarine cable were configured with three conductors with an integrated fiber-optic cable for remote monitoring and control functions. The cable was supplied by ABB of Karlskrona, Sweden.

An operations and maintenance facility was established in Liverpool Harbor to monitor the wind farm’s performance and to provide technicians with access to the turbines by boat for routine inspection and maintenance. These turbines are designed to operate approximately 6,000 hours a year over a 20-year design life.

In 1991, SPG installed the first offshore wind farm in the world in Denmark. The company also teamed with DONG for the North Sea’s Nysted project in 2003. Next year Siemens will start erection work on the largest offshore wind farm in the world, off the east coast of Great Britain. That 180-MW Lynn and Inner Dowsing project will use 54 SWT-3.6-107 wind turbines and will be owned and operated by British Gas’s parent company, Centrica. SPG will be responsible for O&M of the project for its first five years of operation. The overall project cost exceeds $600 million at today’s exchange rates. That project will wrest the title of world’s largest offshore wind project from Nysted.