South Korea is steadily muscling its way into the big league when it comes to leading world economies: It currently ranks 13th. The country, which is officially known as the Republic of Korea, experienced exponential economic growth during the last half of the 20th century. According to U.S. Central Intelligence Agency statistics in The World Factbook, the nation’s per capita gross domestic product grew from only $100 in 1963 to $24,600 in 2007.

In order to maintain breakneck economic growth rates, South Korean industrial and commercial sectors–which include the global giants Samsung and Hyundai–must have an increasingly larger reliable supply of electricity.

With a population estimated at 48,456,000 in mid-2007, the nation has had to maximize its generation of electricity for residential as well as industrial and commercial uses. According to the latest energy outlook report, Energy Info Korea-2008, which was compiled by the Korean Energy Economics Institute (KEEI), in 2007 the annual consumption of electricity was 7,607 kWh per capita. The report notes that in 2007 electricity use by sector broke down as follows: industrial–50.5%, residential/commercial–42.6%, public and others–6.2%, and transportation–0.7%.

GS Electric Power and Services Co. (GS EPS), which owns and operates the Bugok II Power Plant, is jointly owned by GS Holdings (70%) and Oman Oil (30%). In keeping with the vigorous free market model of the South Korean economy, utilities in that nation are moving away from being public entities operated by the government. POWER interviewed T.H.K. Won with GS EPS to find out more about the current business dynamics affecting the utility industry in South Korea that contributed to the success of Bugok II.

“Korea Electric Power Company (KEPCO) was established on July 1, 1961, after three regional electric companies (Chosun, Kyungsung, and Namsun) were merged to form a single national electric power company,” said Won. “KEPCO was maintained as a single monopoly entity that controlled overall areas of electricity business until March 2001. That is when the government began the electricity market reform that was designed to introduce competition in generation by dividing the generation sector of KEPCO into six generation companies as the first step of restructuring the electricity market in Korea. There are four steps for market restructuring in total, and we are still in the first step, which has lasted a long time. It has been delayed from the original plan due to many political reasons.”

According to Won, today’s South Korean electrical power sector can be broken down as follows: KPX (Korea Power Exchange) is in charge of the system operations (such as dispatch, planning, and ancillary services) and market operations (functions releated to selling electricity in the marketplace), while independent power producers (IPPs) are in charge of generation sector (generation companies constitute about 90% of the South Korean market share). Currently, KEPCO only manages the nationwide grid, including transmission/distribution, and retail services.

Additionally, the South Korean government has opened up its power generation sector to outside investors from foreign countries. Won pointed out that GS EPS, Meiyapower, K-POWER, and other generation companies now have foreign investors.

When asked what impact the privately held electric power companies are having on the South Korean economy, Won responded by saying this recent development gives “competitiveness and efficiency to our power business through the use of new and advanced project skills and new machinery.” Clearly, the two-unit Bugok plant has benefited from this arrangement.

GS EPS, which is based in Seoul, was founded in 1996 after the company was awarded the bid to handle the first IPP project–the Bugok I plant. KEPCO was in charge of handling the IPP power purchase agreements. Later, GD EPS was also selected as the IPP for the Bugok II project (Figure 1). 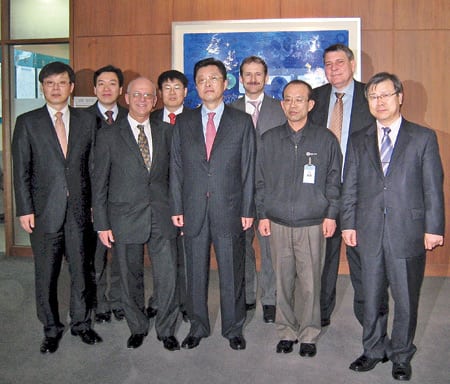 Bugok I and II are located in Dangjin County, approximately 60 miles south of Seoul. Siemens Power Generation was selected to build the two units, which were the first turnkey projects awarded to a foreign company by a South Korean IPP (Figure 2). 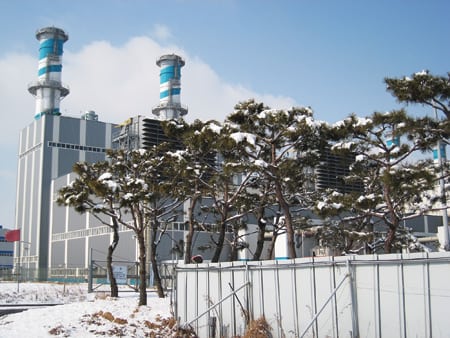 2. Dynamic duo. The Bugok II combined-cycle plant (with the air intake filter house on the right) was built at the same site as the Bugok I plant (left). Courtesy: Siemens

Siemens executed this project together with the consortium partner, GS E&C (a South Korean engineering and construction company), and the customer, GS EPS, at an aggressive pace. After a construction period of only 26 months, the plant, which has a nameplate capacity of 565 MW, was put on-line about one month ahead of schedule, in March 2008. For Bugok I and II, Siemens has also entered into a 20-year maintenance agreement.

Bugok I and II perform very efficiently. Bugok II achieves all guaranteed target numbers and in certain areas even exceeds them. Since commissioning, the plant primarily has performed baseload duty and will not operate in simple-cycle mode.

Siemens, together with GS EPS and GS E&C Corp., chose an arrangement so that both steam turbine generator sets are within a common building (Figure 3). Siemens, however, did extend the Bugok I steam turbine building during construction of Bugok II, using the same building traveling crane. 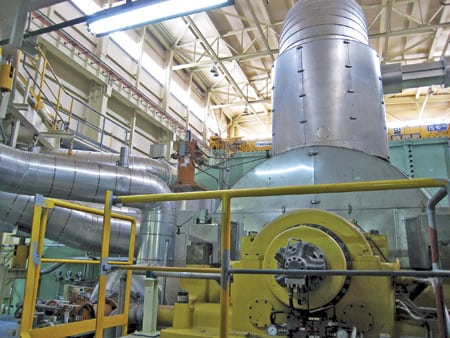 Bugok I and II share cooling water collected from an intake structure placed seven-tenths of a mile out to sea. Water is brought to a canal on land and then pumped to the plant.

Bugok II has an operational efficiency of 58.6%. For its efficiency and environmental achievements, The Korean Ministry of Commerce, Industry, and Energy gave the $319 million plant the number one ranking for combined-cycle power plants in South Korea. The plant is operating mostly as a baseload unit rather than as a part-load/mid-range unit. Bugok II also operates in a “frequency-response mode” to provide grid frequency support, when required–an important function that is invisible to those connected to the grid. The utility’s customers can better appreciate the plant’s higher availability and reliability as its most important function.

Gas turbines. In principle, the SGT6-4000F gas turbines at Bugok I and Bugok II are the same: heavy-duty-type gas turbines with annular combustion chambers. The difference, however, is the improved burner and combustion system used in the Bugok II turbines that allows operation with high fuel gas preheating, combined with higher mass flow from the improved compressor. As a result, the turbines have much more stable combustion with higher output, higher efficiency, and much lower NOx emissions (between 20 and 30 ppm).

Steam turbines. The steam turbine is a Siemens SST6-5000 model, which is a typical solution for combined-cycle plants in which the high-pressure/intermediate-pressure (HP/IP) turbine is in a common cylinder and the low-pressure (LP) turbine is designed for low bay arrangement–with one half of the condenser on each side of the LP turbine. This arrangement provides the advantage of requiring a much smaller turbine building and related cost reductions for avoiding high pedestals for the steam turbine foundation (Figure 4). 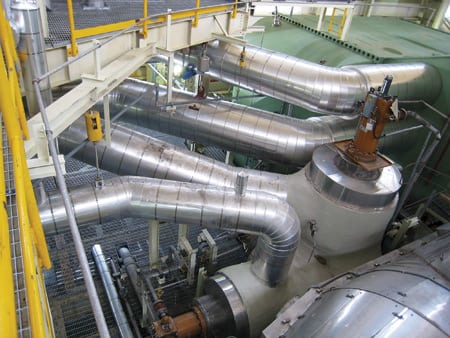 4. Turbine close-up. This photo shows the high-pressure (HP) and intermediate-pressure (IP) steam turbine from the upper platform as well as the main piping to HP/IP steam turbine and the IP/low-pressure bypass ducts to the condenser. Courtesy: Siemens

Instrumentation and control and distributed control system (DCS). The new Siemens Power Plant Automation System T3000 is operating with the older Siemens TELEPERM XP DCS, which was installed with Bugok I. This was the first time that both systems were arranged in a manner that the common systems for both projects can be controlled by both DCSs.

The Bugok site is big enough for its owners to consider additional combined-cycle projects in the future. That’s good for the region, which has a high power demand and requires a stable energy supply. For example, the Dang-jin area has the most potential in South Korea for growth due to the projected expansion of steel plants (owned by big South Korean steel companies such as Hyundai Steel, Dong-bu, and Dongkuk) and additional expansion projected under the national development plan.

Since 2002, in addition to Bugok I and II, Siemens also has been involved with construction of the Incheon I and Yulchon combined-cycle plants. Incheon II is currently under construction and is scheduled to go on-line in the summer of 2009. When completed, all these new power plants, each with a nominal rating of approximately 550 MW, will make major contributions toward providing South Korea with efficient, environmentally sustainable power supplies. Such large amounts of reliable electricity should help keep this particular Asian Tiger purring happily into the foreseeable future.