To read about the history of the Brooklyn Navy Yard is to read about the history of the U.S. Navy and key events in the early life of this country. In 1776, General Washington moved his troops from this area to Manhattan when retreating from British soldiers during the Battle of Long Island. A private shipyard was established in the surrounding muddy marshlands in 1781 and was purchased for $40,000 by the fledgling U.S. Navy in 1801 for what would become known as the Brooklyn Navy Yard.

Many well-known ships were constructed at the yard over the next 150 years. The first to be built, the USS Ohio, was one of the largest battleships of its time and was launched in 1820. The USS Monitor was outfitted and commissioned at the yard in 1862 before the Battle at Hampton Roads against the CSS Virginia. The USS Maine was commissioned in 1895 to begin the "battleship era" and served as a call to arms three years later when it was sunk in Havana Harbor, sparking the Spanish-American War. The USS Arizona was launched from the yard in 1915 only to experience a similar fate at Pearl Harbor in 1941.

During WWII, the yard’s workforce peaked at 70,000 with many "Rosie the Riveters" doing their part for the war effort. In the mid-1950s the yard turned out three of the new "super carriers," but by the early 1960s major shipbuilding contracts had migrated to lower-cost yards. The Brooklyn Navy Yard was closed in 1966 and later sold to the City of New York for $24 million. Today, the Brooklyn Navy Yard Development Corp. (www.brooklynnavyyard.com) is a thriving 300-acre industrial park including 40 buildings and more than 200 tenants as it enters its third century of service.

Tucked away in one corner of the yard is the Brooklyn Navy Yard Cogeneration (BNYC) facility – the lifeblood of this thriving complex and an important part of the New York electric and steam systems. BNYC (Figure 1), by virtue of its strategic location across the East River from downtown Manhattan, provides steam to Consolidated Edison’s (ConEd) steam system, Brooklyn Navy Yard Development Corp. (BNYDC), and New York City’s Red Hook Wastewater Treatment Plant. Electricity is sold to ConEd under a long-term power purchase agreement. 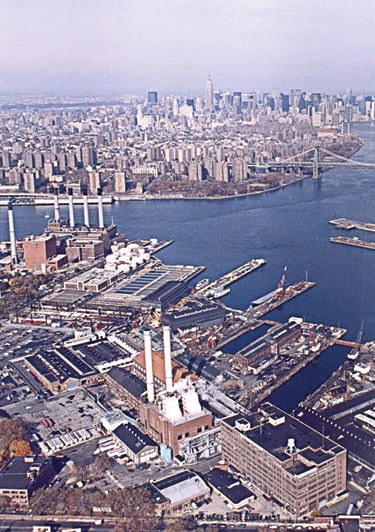 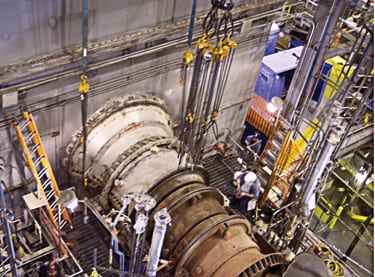 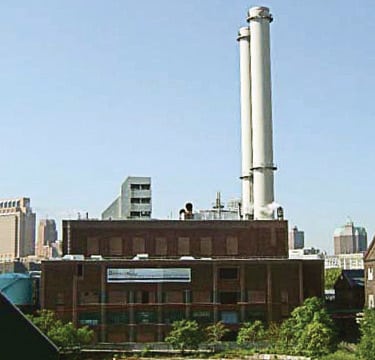 In 2001, after five years of operation, circumstances forced then-owner Edison Mission Energy to consider selling the plant. Developers with wads of cash to invest were common at that time, and a deal was quickly struck. The good news was that the deal fizzled right before closing when Enron collapsed; the bad news was that money supplies had dried up—as had prospective purchasers. Then the other shoe dropped.

Despite the plant’s successful operation during its first few years, a hidden unrecognized problem lurked beneath the surface. An inadequately designed water treatment system led to water chemistry problems, causing flow-accelerated corrosion and other problems on the cold end of the unit, resulting in extensive water-side damage; additionally, gas-side deposits reduced the heat exchanged effectiveness of the finned tubes. The problems came to light with a water leak in 1999 followed by several steam line leaks.

Water chemistry was ultimately confirmed as the root cause of the problems, and new treatment regimens were instituted to permanently solve them. However, irreversible damage had occurred, and major investments were needed to replace approximately 50% of the HRSG surface area (36 harps) and other miscellaneous parts. At the same time major changes were under way in the New York wholesale electricity markets that added more uncertainty to a deal that most investors weren’t ready to tackle. Understanding technical risk is not an investment banker’s forte.

Riding to the rescue

Where others saw uncertainty, Delta Power saw opportunity. Delta Power, formed in 1997 and staffed by executives with decades of energy industry experience—in cooperation and consultation with its partner and co-owner Metalmark Capital—understood that BNYC was a diamond in the rough and that all its technical problems were solvable. In the spring of 2004, Delta Power and Metalmark Capital purchased a controlling stake in BNYC and developed a plan to revitalize the project with the right mix of technical talent and investment dollars.

Upgrades began immediately after the deal was inked, with major repairs planned for the spring 2005 outage. By the end of 2004 contracts were in place for major upgrades to the HRSGs.

Purchasing replacement tube assemblies may have been the easiest part of the project. BNYC is fully enclosed in a 12-story building (with no elevator) and surrounded by narrow streets and other buildings, making delivery and installation a logistical nightmare. Delivery of replacement harps for the HRSG had to be completed at night to reduce traffic snarls. Two cranes, a hole cut in the roof, and around-the-clock work by trades and plant staff kept the project on schedule (Figure 4). Two years later, BNYC continues to operate efficiently with no recurrence of any of the problems that plagued Mission Energy. 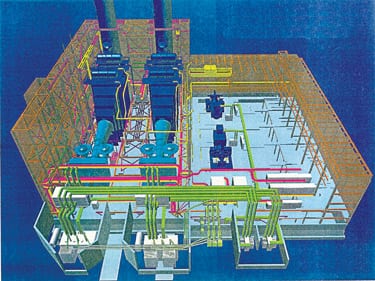 Upgrades were not confined to the HRSGs but included the gas turbines, to increase efficiency and reduce emissions. More-efficient premix HR3 burners use water for NOx control when burning gas. These upgrades not only reduced NOx emissions by 5% but also lessened the demand for ammonia injected into the SCRs by 3%. Actual emissions levels in 2003 were 0.0079 lb NOx/mmBtu. The 2007 goal calls for a further reduction in NOx emission level to 0.0075 lb NOx/mmBtu. BNYC has committed through the EPA Performance Track program (see below) to reduce NOx to 151,775 lb per year by 2007, almost 50% below the annual permitted level of 299,000 lb.

Gas turbine controls were also upgraded with a Siemens XP-based Teleperm system. The plant controls, based on the Bailey Infi 90 (Figure 5), were upgraded with new operator interface screens. The UPS system was upgraded by configuring two existing UPS units to share critical bus load and by adding a new backup unit. 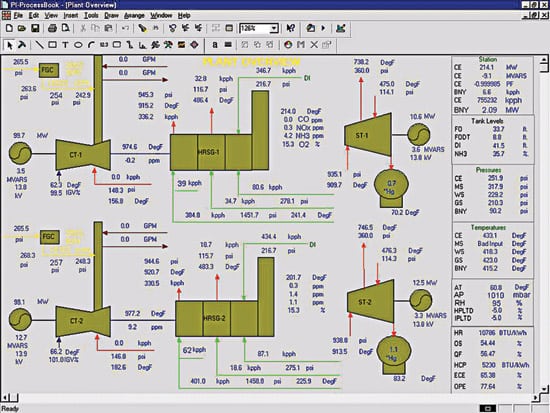 BNYC was inducted as a member of the Performance Track Program recognizing excellence in maintaining a strong environmental performance record and an outstanding facility compliance record. BNYC joined an exclusive group, as only a handful of power plants are members. According to the EPA, to qualify, applicants must meet four criteria: They must have implemented an independently assessed environmental management system, have a record of sustained compliance with environmental laws and regulations, commit to achieving measurable environmental results that go beyond compliance, and provide information to the local community on their environmental activities. Performance is reassessed annually to maintain the facility’s certification.

Delta Power and BNYC are equally committed to being good neighbors in their communities, improving the environment, and striving for efficiency, no matter how challenging the circumstances. Delta Power, along with Metalmark Capital, had the vision, experience, and financial support to allow a dedicated and creative staff to turn around a prematurely aging plant into the environmental superstar it is today. BNYC is now operating at the efficiency it was designed for and is friendlier to the environment than ever before.