Top Plant: From tall skyscrapers and flashing neon signs to Buddhist temples and pagodas, South Korea is a mixture of the new and old Asia. Doing its part to help modernize this country, the Boryeong Thermal Power Complex operates six coal-fired 500-MW units that provide electricity to power South Korea’s economic growth. One of the important reasons for this facility’s overall success is its operational reliability. An example of this is Boryeong Unit 3’s outstanding achievement of 3,000 days of trouble-free operation.

The yin and yang symbol on the South Korean flag seems to sum it all up. This is a land of contrasts in which opposites coexist well. This country, which is officially known as the Republic of Korea and is the home of approximately 49.2 million people, consists of the booming contemporary city of Seoul as well as ubiquitous rice paddies that often are still cultivated using centuries-old agricultural methods.

Although this Asian country continues to honor its traditions, it is definitely focused on moving forward into the information age. A poor agrarian country for much of the 20th century, South Korea has undergone a remarkable economic transformation in the past four decades that has earned it the nickname of the “Miracle on the Hangang River.”

The official web site of the Republic of Korea points out that from 1962 to 2007, South Korean’s gross domestic product increased from US$2.3 billion to US$969.9 billion. South Korea now relies on a number of world-class industries to produce major exports, which include raw materials such as crude oil and natural minerals, general consumer products, foodstuffs, and goods such as machinery and electronic and transportation equipment.

According to information compiled by the British Chamber of Commerce, the South Korean government has focused on the importance of foreign direct investment (FDI) to its economy and its future. The nation is doing all it can to promote an optimum environment for foreign investors. For example, this year the South Korean government expects an $11 billion foreign investment, similar to that of last year.

The evolution of South Korean utilities

The lifeblood that has helped to create this South Korean economic metamorphosis has been abundant and reliable electricity. In order to meet the rapidly escalating needs of this nation’s flourishing economy, South Korean electric utilities have moved away from being public entities operated by the government.

Back in 1961, the South Korean government established the Korean Electric Power Co. (KEPCO) to operate as the nation’s single electric power company. Then in 2001, the government introduced market reform and divided KEPCO into six generating companies in a step toward restructuring the country’s electricity market. In April 2001, Korea Midland Power Co., Ltd. (KOMIPO) was incorporated as a KEPCO spin-off.

In keeping with its policy of promoting FDI throughout its economy, the South Korean government has opened up its power generation sector to foreign investors. For example, KOMIPO has received high credit ratings from international credit ratings organizations Moody’s and Standard & Poor’s. On its corporate web site, it openly seeks “a friendly investor base at home and abroad.”

Since its combined-cycle power plant was completed in August 2002, Boryeong Thermal Power Complex has become the largest thermal power generation complex in South Korea. The Boryeong facility consists of the following individual plants: 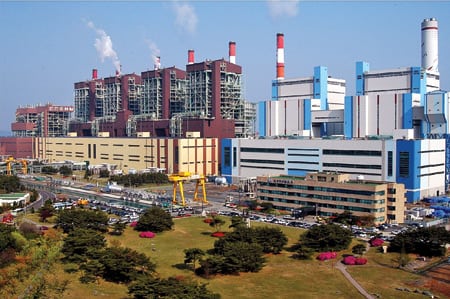 Boryeong Thermal Power Complex has been recognized by the Korea Power Exchange for its excellent performance record related to operation and maintenance (O&M). Specifically, Boryeong’s Unit 3 achieved the remarkable record of 3,000 days of continuous, trouble-free operation—from Dec. 17, 1998, to Oct. 26, 2007. That’s more than nine years. This is the first plant in the world to achieve such a significant milestone.

South Korea uses a standardized 500-MW supercritical coal-fired design at many of its stations. Unit 3, which was the first supercritical pressure standard coal thermal power plant in South Korea, attained its record by completing a number of plant upgrades that have significantly increased its operational reliability.

To understand the magnitude of Unit 3’s recent accomplishments, it is helpful to review its background. The plant was designed, constructed, and completed solely by Korean engineers. After its completion in 1993, the unit’s turbine suffered from decreased maximum output. The unit also has suffered several forced outages due to control instabilities in the boiler system. However, since the Unit 3 staff implemented new facility improvements, they have not had any unplanned outages. Additionally, continuous facility improvements have allowed the turbine to increase its output (Figure 3). 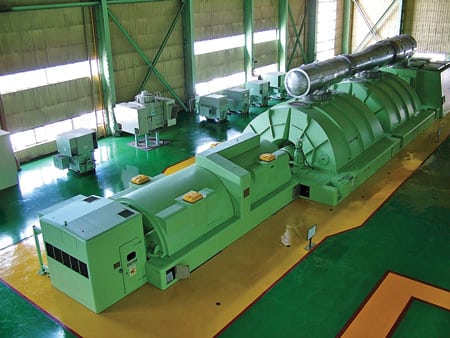 Unit 3 is not the only O&M high achiever among units operated at the Boryeong facility. As of Feb. 11, 2007, Unit 4 had achieved a 500-day run of continuous, trouble-free operation. The employees’ efforts to be proactive about maintenance and to improve their responses to emergency situations helped the facility reach this achievement. According to KOMIPO management, Unit 4 has not only excelled at improving its O&M processes but also has played a key role in creating profits for the company through its low power generation costs and a capacity factor exceeding 90%.

To accomplish their goal of achieving trouble-free operations, Boryeong Unit 3 personnel implemented a wide variety of processes and technologies. As a result, they increased their work efficiency and greatly improved their operational processes.

Improvement of steam turbine bearings. The plant’s turbine bearings had problems with high temperatures and high vibration levels. The staff dealt with these issues by modifying the design of the support of its tilting pad bearings.

Recovery of turbine performance. Another challenge involved improving the performance of the plant’s turbine. Plant personnel recovered 31 MW of output by removing deposits on the turbine nozzle valves. They also improved the steam turbine’s efficiency by reducing internal and other packing steam leakages.

Improving UPS systems. The staff implemented an uninterruptible power supply (UPS) parallel operation system. The plant’s two UPSs operate in parallel to take 50% of the load. If one of the units has problems, the other one takes 100% of the load. In addition, plant personnel installed a UPS surge prevention system on the load side of the UPS.

Establishment of a turbine water induction prevention system. To record and inspect water temperature differences, the staff installed a thermocouple that detects water induction in the upper/lower side of high/intermediate-pressure turbines.

Development of a clinker inspection system within the boiler. The plant personnel’s goal was to prevent boiler damage due to the boiler tube overheating and clinker falling. They implemented a new procedure in which clinker attached to the boiler superheater and reheater is inspected to prevent clinker damage and to maintain optimized operation of the sootblower.

Establishment of a redundant system for the boiler main control facility. The staff installed a new control system, reinforced by the redundant system, for major controllers and input/output signals related to unit trip or load reduction in the boiler.

Development of the e-P&I system application. The Boryeong staff developed the electronic-Piping & Instrumentation system (eP&I system), which is an intelligent software system that can search for facility drawings and all facility information, and then put that information to use for optimizing maintenance activities.

Providing online access to operational information. By downloading operating information found on the intranet that interconnects all computers in the company, the staff can collect and analyze real-time operational data for use in preventive maintenance activities (Figure 4). 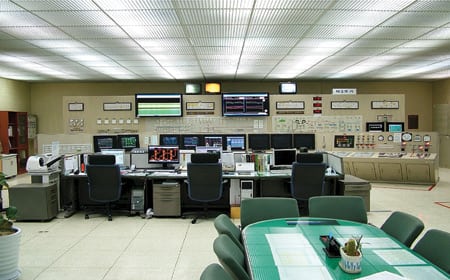 Currently, the Boryeong Thermal Power Complex is being reborn as an integrated power generation complex equipped with renewable energy facilities. Its new alternative energy sources include the 525-kW solar photovoltaic system, which in 2008 was installed on the office building of the power plant, and a 2.5-MW hydroelectric power plant that is under construction, and which will use a waterway to transport the necessary water.

Not satisfied to focus only on O&M improvements, Boryeong Thermal Power Complex also is striving to improve its environmental performance. For example, all of Boryeong’s coal-fired power plants are equipped with desulfurization and denitrification facilities. In addition, flyash and desulfurized plaster, by-products of coal-fired generation, are recycled into cement and plasterboard.