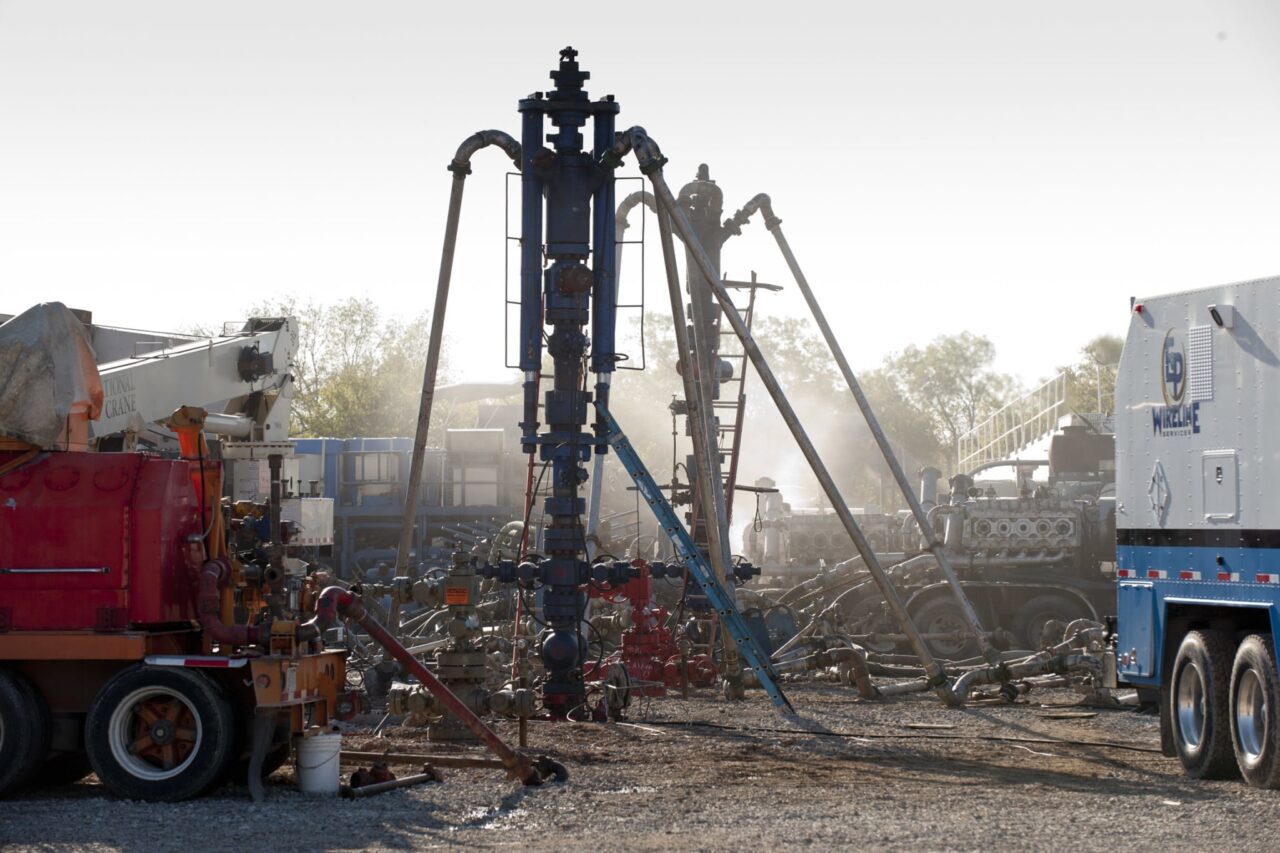 This week, the Bonn climate change conference concluded in Germany. During the talks, discussion focused on adaptation and long-term greenhouse gas emissions reduction goals to meet climate targets. These mitigation and adaptation strategies build on international momentum to tackle climate change, such as China’s announcement that by 2016, its first carbon emissions cap will come into effect, and the US Environmental Protection Agency’s statement that it will set standards for large power plants and factories to reduce their emissions by 30% by 2030, compared to the levels in 2005.

While such initiatives from global powers are critical to a sustainable future, governments must also ensure that policies enacted to curb greenhouse gas concentrations and alleviate climate change do not place untenable pressure on local resources, such as water.

Worldwide, governments have viewed shale gas development as a panacea, one of the fundamental ways their nation may reduce carbon dioxide emissions, while creating jobs, and emboldening a nation’s energy security and independence. Yet, its development can come with extreme environmental, social and economic cost if not managed properly.

Shale gas’ development worldwide, through the use of hydraulic fracturing, or fracking, has ignited deep and divisive controversy regarding its many environmental and social impacts. In fracking, a fluid containing water, chemicals, and sand is pumped at high pressure down a well to stimulate natural gas in the targeted rock formation. The borehole casing of the well is perforated at depth, permitting the highly pressurized fracking fluid to expand out, into the rock, creating fissures in the formation. The natural gas and a fraction of the injected fracking fluid then flow back up the well and are piped away for processing.

Thus, current shale gas development is highly dependent on water resources. This creates a dynamic interaction between the two resources, in an energy-water tradeoff. In this regard, three concerns have attracted substantial attention. The first of these concerns is focused on the high volume of water required to stimulate the natural gas reserves in the tight sand formations. The second concern is directed to the management of the produced water emitted by fracked wells. The third concern pertains to the chemical composition of the fluids used in the fracking process, which could possibly contaminate drinking water wells due to the migration of chemicals in groundwater systems.

As fracking technologies are introduced globally, the energy-water tradeoffs, among others must be considered. Opponents to fracking highlight issues of potential groundwater contamination, methane emissions, waste disposal and treatment, land degradation, and other environmental impacts. While, development proponents argue that existing operational practices and safeguards ensure environmental impacts are being avoided and abated, and that any remaining environmental risks are justified by the economic benefits. As a result of such varied opinion, states across the US have a range of regulation, from more relaxed approaches, to Vermont, which has banned hydraulic fracturing across the state. In addition, countries such as France, Germany, the Netherlands, the UK, and Australia have partially banned or delayed fracking due to concerns.

On the Bakken shale play in the arid, west of North Dakota an estimated 200 new wells are developed every month, and more than 510,000 bbls of oil are produced per day. While this has had profound effects on the local economy, driving the state’s unemployment rate down to 2.7% compared to the national average of 6.3%, increasingly exhausted water resources may threaten the long-term viability of projects.

In total it is predicted that, at current rates, the fracking processes in western North Dakota will require a projected 5.5 billion gallons of water per year for the next 20 years in order to obtain the natural gas bound within the shale. Due to the inherent scarcity of the region, residents have been selling water resources to oil and gas companies for profit. The high volume of water generated from fracking has heightened residents’ anxiety regarding environmental consequences of drilling. In 2011, North Dakota energy companies reported more than 1,000 accidental releases of oil, drilling wastewater and other fluids, with many more incidents of illegal disposal going unreported.

Responding to concerns about fracking’s dependence on water, companies are developing new technologies to recycle produced water, which flows back up the well with the gas, in future drilling operations. Other companies are attempting to frack without water, or by substituting other liquids for water. While some of these advances are in nascent stages, they may reduce demand for freshwater resources during operations and benefit the company economically.

Such recycling systems can be developed in cases where there is a constant supply of produced water due to year-round operations and concentrated development, which allow for economies of scale, and therefore provide for sustainable, profitable operation of a CGS and produced water recycling facility. Recycling systems allow companies to minimize transportation costs by piping heavy liquids from the well to the treatment facility, as opposed to using trucks.

The integrated approach to infrastructure emphasizes how coordinated energy development and water reuse can be better for the environment and be more economical. Cooperative management and development decreases pressure on local water resources and ensures the viability of future drilling operations.

Best practices from the US experience, such as produced water recycling, should not be isolated from international development, as other countries seek to bring vast shale gas resources online.

As China seeks to rapidly increase shale gas production to meet growing energy demand and emissions targets, and enhance energy security, it may apply lessons from the US to avoid adverse consequences of development.

According to the U.S. Energy Information Administration’s 2013 estimation, China has 31.6 trillion cubic meters (tcm) of technically recoverable shale gas resources, almost as much as the U.S. and Canada combined. As such, China’s 12th Five-Year Plan (2011-2015) outlines how the government aims to greatly commercialize production of shale gas by 2015, producing 6.5 million cubic meters by that year, and 10 billion by 2017. As of February 25, 2013, China had invested more than $1.14 billion in shale gas survey and exploration.

To achieve the 2020 target, China’s shale gas production would have to increase production by 65% per year from the skeleton structure it is today. However, to do this, China will have to overcome several natural, technological and regulatory factors.

Among the natural challenges China faces, are its water scarcity, which may become a bottleneck to economic and social development. China has approximately 20 percent of the world’s population and only 6 percent of the world’s water resources, making China one of the least water-secure countries in the world. Its water shortages are made worse by pollution, where about 40 percent of China’s rivers were so polluted they were deemed unfit for drinking, and 300 million rural residents lack access to safe drinking water each year. Groundwater depletion is another critical concern for China, with Northern provinces digging 120 to 200 meters to find drinking water, compared to wells an average 10 to 30 meters deep a decade ago. Thus, China is facing imminent water shortages due to increased population growth and contamination of water sources.

Fracking may exacerbate the nation’s existing water crisis, as most of China’s shale gas lies in areas plagued by water stress. Water is scarce in the gas-rich Tarim basin, whereas the Sichuan basin is heavily populated and therefore the potential water stress is a result of competitive use. As water demand increases across sectors, it is forecasted that by 2030, China could face a gap of 201 billion cubic meters. Complicating matters, much of China’s water is located in the south, while majority of the population lives in the north.

Additionally, China’s shale gas deposits are deeply buried, in structurally complex geologies with numerous faults, and some are seismically active. These natural factors make development more challenging. Some geophysicists question whether all shale deposits are as deep as described and are interested in acquiring the data to verify. Due to these natural complications, as China develops its shale gas resources; it is critical that the implications of energy development on water resources are fully considered.

Additionally, China has been actively acquiring overseas assets to learn about shale technology. Despite billions in investment, those transactions don’t buy transfer the technology, so Chinese companies largely depend on foreign knowledge. Furthermore, not only does China lack the key technologies, but it also has a dearth of corresponding service equipment and equipment suppliers at each step of the development chain, and the technical personnel to build their knowledge capacity.

Another major obstacle to shale gas development is pipeline adequacy and access. Currently, there are insufficient pipelines and those that exist are not accessible, due to location or ownership. China National Petroleum Corporation (CNPC) and Sinopec monopolize the pipelines, which hold 75% of the market share. Different local distributers operate the local distribution networks. Furthermore, the National Oil Companies (NOCs) are not obligated to accept the shale gas exploited by private companies to their pipelines. To try and address this issue, the CNPC announced in June 2013 that it had started building the country’s first dedicated shale gas pipeline in Sichuan province. However, more needs to be done to ensure the pipeline governance structure does not prohibit the emergence of an integrated national gas transmission grid.

China’s regulatory regime governing shale gas further complicates development, as it is divided for the three key aspects of shale gas development: exploitation, environmental protection, and trade. At least seven ministerial level agencies are involved in regulation, yet there is no clear division of responsibilities, therefore dissolving accountability. Despite the critical nature of water to energy development and fracking, the Ministry of Water is not involved in the shale gas regulatory regime.

China’s rights regime is potentially the biggest hurdle for shale gas development due to the lack of private ownership of land and mineral rights, and the issue of overlapping land use right, mineral right and exploitation rights. Due to the lack of technical knowledge and ownership, and the uncertainty in the rights regime, foreign companies have been wary of working in China to this point. The licensing process is also cumbersome for private companies.

To ensure that China addresses the many challenges inherent to fracking, the Chinese government could take a number of steps to increase data availability, enhance transparency and build confidence. For example, integrate the Ministry of Water into the shale gas regulatory regime; coordinate water management efforts; implement water rights and trading schemes.

Furthermore, China could assess the future, competing uses of water, including projected needs of the energy sector, and the quantification of the tradeoffs; additionally, the impact of climate change on their water and energy resources and development plans.

As countries develop shale gas, it is critical to share lessons learned from the US internationally and consider how mistakes made over the years in the US can be avoided elsewhere. Over the years, recommendations have been published to impart useful knowledge on the development process underway in each country, enabling governments, community and industry to coordinate efforts more easily.

Specifically, guidelines have encouraged existing institutions to share information and disclose chemicals used in fracking operations. They have also outlined how nations must define responsibility to ensure accountability and develop strong regulatory and enforcement structures. Additionally, that prior to development, nations should consider the long-term implications of unconventional gas development and analyze the baseline water quality.

These are just a few of the many present recommendations to ensure countries can benefit from shale gas development without the burdensome legacy of poor planning. Each shale formation requires different fracking techniques and exists in a unique economic, environmental, and social landscape. Best practices must be adapted to the circumstance of each country, as in the end, all successful solutions will be local and context-specific.

—Antonia Sohns is a Washington DC-based writer on science, community and politics (@ayearforwater)