Two reading recommendations for the upcoming Labor Day weekend. One is non-fiction, the other is fiction. Both are relevant to those of us who seek to understand the U.S. electrical system. Both are excellent reads.

Gretchen Bakke, The Grid: The Fraying Wires Between Americans and Our Energy Future, is my nonfiction choice. Bakke gets it. A cultural anthropologist, she’s far more perceptive than many of the engineers, economists, environmental analysts and activists who opine about the U.S. electrical system. While the conventional debate centers of power generation – the decline of coal, the rise of gas, the hyperbolic increase in renewables — Bakke gets to the heart of the matter. It isn’t how you make the electricity, it is how you get it to consumers.

Looking at coal, she writes, “A coal-burning plant might be bad for the environment, it might be bad for the miners who struggle underground to bring that coal up and bad for the West Virginia mountains razed in its production, but it’s a remarkably good fit for the grid. And not just coal,” siting energy-dense resources such as natural gas, oil, and uranium. (Of course, the coal doesn’t come primarily from Appalachia, but from Wyoming and Montana, where well-paid miners don’t struggle underground but drive large pieces of equipment on the surface).

Bakke writes that the grid (which she correctly notes is three grids – the Eastern Interconnection, the Western Interconnection, and the anomalous Texas grid) “isn’t just some contraption wired together out of various bits of this century and the last (plus a substantial shake of nineteenth-century ways of doing and building as well). It’s also a massive cultural system. And the stakeholders – the utilities, investment firms, power plant owners, mining firms, and ‘too big to fail’ multinational conglomerates – will not go gently into the future’s bright night.”

A fine interview of Bakke with Fresh Air’s Dave Davies of NPR is available on line. 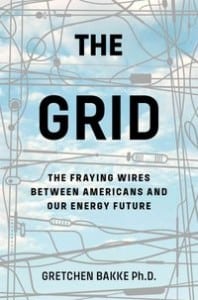 For fiction, my recommendation is Graham Moore, The Last Days of Night. This historical novel by the 2015 Oscar winning screenwriter of the movie The Imitation Game (I have not seen the film) recounts with fiction, but closely-hewed to the facts, the war among George Westinghouse, Thomas Edison, and Nikola Tesla in the late 19th Century over whether the U.S. would have a power distribution system based on direct current or alternating current.

The novel is a page-turner all the way. I read it in one sitting. The story is from the point of view of young lawyer Paul Cravath, a real character who later became the legendary founder of the New York law firm of Cravath, Swain, and Moore. He becomes, largely by default, the lawyer for George Westinghouse in the dispute with Edison over the patents for the electric light bulb, which morphs into the fight over AC or DC power.

Edison is the villain in Cravath’s mind, which is refreshing in that Edison has long been viewed as a historically benign figure. I have been guilty of this Edison worship in the past, but this novel puts the Wizard of Menlo Park in new perspective.

Moore’s take on Edison is that he was a genius at organizing a research team and a public relations mastermind. Westinghouse was more of an individual inventor and reclusive sort. Tesla was, well, brilliant but totally nuts.

Of Edison, Moore wrote, “Reality mattered not at all; perception was the whole of business. Edison had realized this before they had. While Westinghouse was using Tesla’s discoveries to develop a superior product, Edison had skipped straight to developing a superior story.”

Scott Simon of NRP’s Weekend Edition on August 13 had an interesting interview with Moore, discussing the novel.