For more than 25 years, feedback-loop global circulation models (GCMs) have been the staple of predictions of the pace of global warming and the effects of the warming on the world. A new PhD dissertation from The Netherlands casts fundamental doubts about the value of the models. (A hat-tip to Georgia Tech’s Judith Curry for flagging this paper on her Climate Etc. blog.)

The doctoral thesis by Alexander Bakker grew out of his work for the Royal Netherlands Meteorological Institute (KNMI), where he was assessing climate change impacts, using the GCMs. He writes that “in the course of time, I became concerned about the dominant role of GCMs. During my almost eight year employment, I have been regularly confronted with large model biases. Virtually in all cases, the model bias appeared larger than the projected climate change, even for mean daily temperature.”

Bakker said, “It was my job to make something ‘useful’ and ‘usable’ from those biased data. More and more, I started to doubt that the ‘climate modelling paradigm’ can provide ‘useful’ and ‘usable’ quantitative estimates of climate change.” His work may help explain the nearly 20-year “pause” in global warming that has perplexed climate scientists, as the empirical record of warming – that there has been no statistically-significant global warming since around 1997 – is not in sync with the models’ predictions. 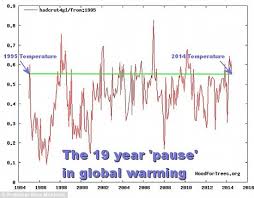 As a result, after years of work with the models, Bakker changed the thrust of his thesis into a detailed critique of the climate models. The highly complex, coupled atmospheric-ocean GCM’s (AOGCMs) have dominated climate assessments for two reasons, Bakker argues.

1.)    The more physics and the more complexities the models incorporate convince scientists of their validity because of the “many feedbacks in the climate system.”

Bakker concludes, “The state-of the-art fully coupled AOGCMs do not provide independent evidence for human-induced climate change. GCM-based multi-model ensembles are likely to be (implicitly) tuned to earlier results. The confirmation of earlier results by GCMs is therefore no reason for higher confidence.” He adds, “Besides, the GCMs only include a limited selection of potentially important feedbacks and sometimes artifacts have to be incorporated to close the radiative balance.”

Bakker’s concluding statement, “The ‘climate modelling paradigm’ is in ‘crisis’. It is just a new paradigm we are waiting for.”

Judy Curry, long a critic of the global circulation models, commented that “the remarkable aspect of this to me is that the ‘philosophy of climate modeling’ essay was written not by a philosopher of science or a climate modeler, but by a scientist working in the area of applied climatology. His experiences in climate change  impact assessments provide a unique perspective for this topic. The thesis provides a very strong argument that GCM climate models are not fit for the purpose of regional impact assessments.”