This blog is part of a special series from the International Monetary Fund (IMF) on the response to the coronavirus. The IMF is an organization of 189 countries, working to foster global monetary cooperation, secure financial stability, facilitate international trade, promote high employment and sustainable economic growth, and reduce poverty around the world.

The COVID-19 pandemic is a crisis like no other. It feels like a war, and in many ways it is. People are dying. Medical professionals are on the front lines. Those in essential services, food distribution, delivery, and public utilities work overtime to support the effort. And then there are the hidden soldiers: those who fight the epidemic confined in their homes, unable to fully contribute to production.

In a war, massive spending on armaments stimulates economic activity and special provisions ensure essential services. In this crisis, things are more complicated, but a common feature is an increased role for the public sector.

At the risk of oversimplifying, policy needs to distinguish two phases:

Phase 1: the War. The epidemic is in full swing. To save people’s lives, mitigation measures are severely curtailing economic activity. This may be expected to last at least one or two quarters.

Phase 2: the Post-War Recovery. The epidemic will be under control with vaccines/drugs, partial herd immunity, and continued but less disruptive containment measures. As restrictions are lifted, the economy returns—perhaps haltingly—to normal functioning.

The success of the pace of recovery will depend crucially on policies undertaken during the crisis. If policies ensure that workers do not lose their jobs, renters and homeowners are not evicted, companies avoid bankruptcy, and business and trade networks are preserved, the recovery will occur sooner and more smoothly.

This is a major challenge for advanced economies whose governments can easily finance an extraordinary increase in expenditures even as their revenues are dropping. The challenge is even greater for low-income and emerging economies that face capital flight; they will require grants and financing from the global community (a focus for a subsequent blog).

Unlike other economic downturns, the fall of output in this crisis is not driven by demand: it is an unavoidable consequence of measures to limit the spread of the disease. The role of economic policy is hence not to stimulate aggregate demand, at least not right away.  Rather, policy has three objectives:

Greater intervention by the public sector is justified by the emergency for as long as exceptional circumstances persist, but must be provided in a transparent manner and with clear sunset clauses.

Policies in support of households, businesses, and the financial sector will involve a mix of liquidity measures (provision of credit, postponement of financial obligations) and solvency measures (transfers of real resources). 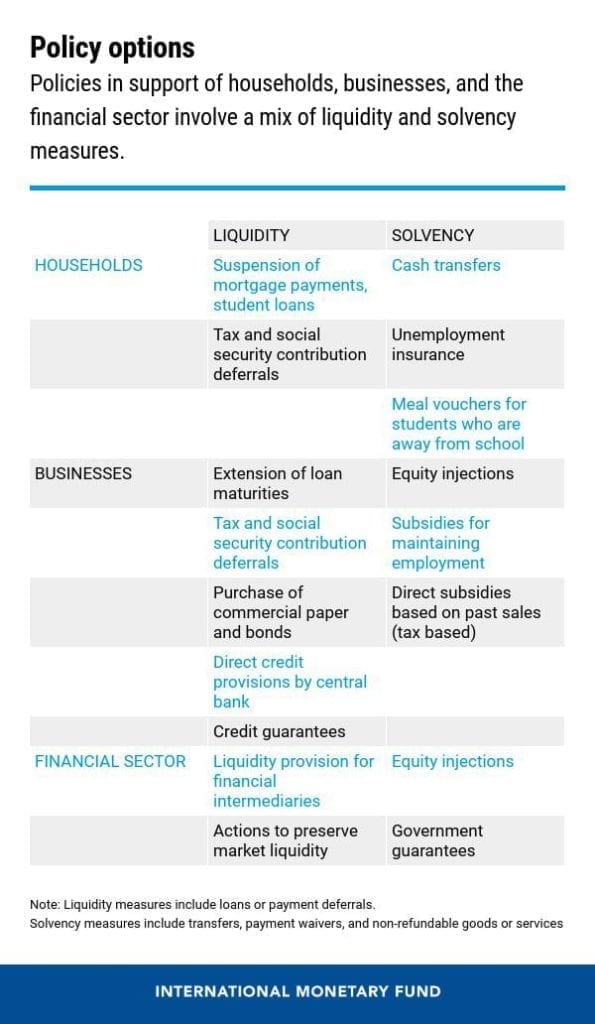 Several tradeoffs will need to be managed. If transfers or subsidized loans are given to a large corporation, they should be conditional on preserving jobs and limiting CEO compensation, dividends, and stock repurchases. Bankruptcy would ensure that equity holders share some of the costs, but would also cause significant economic dislocation. An intermediate option is for the government to take an equity stake in the firm. When liquidity is the problem, credit by the central bank (through asset purchase programs) or other government controlled financial intermediaries (through loans and guarantees) has proven effective in previous crises. Many practical questions arise also in identifying and supporting hard-hit small- and medium-sized enterprises or self-employed individuals. For these, direct transfers based on past tax payments should be considered.

These domestic policies need to be supported by maintaining international trade and cooperation, which are essential to defeating the pandemic and maximizing the chances of a quick recovery. Limiting the movement of people is necessary for containment. But countries must resist the instinct of shutting down trade, especially for health care items and the free exchange of scientific information.

From Shelter-in-Place to Recovery

Promoting the recovery will have its own challenges, including higher levels of public debt and possibly new swaths of the economy under government control. But relative success in Phase 1 will ensure that economic policy can go back to its normal operation. Fiscal measures to boost demand will become increasingly effective as more people are allowed to leave their homes and go back to work.

Interest rates and inflation were projected to be low-for-long prior to the pandemic in most advanced economies. Preventing major disruptions in supply chains should avoid inflation during the emergency and recovery phases. If the measures to contain the spread of the virus are successful, the necessary increase in the public debt ratio will have been sizable, but interest rates and aggregate demand are likely to remain low in the recovery phase. Under those circumstances, fiscal stimulus will be appropriate and highly effective in most advanced economies. And this will facilitate exit from the exceptional measures introduced during the crisis.

Giovanni Dell’Ariccia is Deputy Director of the Research Department. Previously he worked in the Asia and Pacific Department. His research interests include: Banking; the Macroeconomics of Credit; Monetary Policy; International Finance; and Conditionality in International Lending and Aid Programs. Mr. Dell’Ariccia holds a bachelor degree from University of Rome and a Ph.D. in economics from MIT. He is a CEPR Research Fellow.

Antonio Spilimbergo received his Ph.D. in economics from M.I.T. Since 1997 he has worked at the IMF where he is currently Deputy Director in the Research Department. He has been mission chief for Brazil, Italy, Slovenia, Russia, and Turkey. He is a Research Fellow at CEPR and CreAm. He co-edited the books “Brazil: Boom, Burst, and the Road to Recovery” and “Getting Back on Track: Growth, Employment, and Rebalancing in Europe,” and has published in leading academic journals, including American Economic Review, Review of Economic Studies, Journal of International Economics, Review of Economics and Statistic, American Economic Journal: Macroeconomics.

Paolo Mauro is Deputy Director in the IMF’s Fiscal Affairs Department. Previously, he held various managerial positions in the IMF’s African, Fiscal Affairs, and Research departments. He was a senior fellow at the Peterson Institute for International Economics and visiting professor at the Johns Hopkins University Carey Business School in 2014–16. His articles have been published in journals including the Quarterly Journal of Economics, Journal of Monetary Economics, and Journal of Public Economics, and have been widely cited in academia and leading media outlets. He has co-written three books, including World on the Move: Consumption Patterns in a More Equal Global Economy; Emerging Markets and Financial Globalization; and Chipping Away at Public Debt.

Jeromin Zettelmeyer rejoined the IMF as Deputy Director in the Strategy, Policy and Review Department in August 2019. He was previously Senior Fellow at the Peterson Institute for International Economics, Director-General for Economic Policy at the German Ministry for Economic Affairs (2014-2016), Director of Research and Deputy Chief Economist at the European Bank for Reconstruction and Development (2008–2014) and IMF staff member (1994–2008). He is a CEPR research fellow and a member of CESIfo, and led CEPR’s Research and Policy Network on European Economic Architecture during 2018-19. He has published in major economics journals and is co-author of Debt Defaults and Lessons from a Decade of Crises, a study of sovereign debt crises during the 1990s and 2000s. Mr. Zettelmeyer holds a Ph.D. from MIT and an economics degree from the University of Bonn.