I was at my desk in the Energy Daily newsroom on April 26, 1986 when someone handed me a bulletin ripped from one of the wire service machines in the National Press Club building in Washington, where our office was located. The bulletin said a nuclear power plant had exploded in the Ukraine in the Soviet Union, as many as 10,000 fatalities had resulted.

I was astonished but skeptical. I didn’t know much about Russian nuclear plants, but I knew U.S. plants were unlikely to explode. As it turned out, the early accounts were vastly overblown. The claim of fatalities was bogus. The event was earth-shaking nevertheless.

The accident at Chernobly would come to dominate my attention as a reporter for the next year or so, as I began to tease out the characteristics of the Soviet graphite plants, how the Russians responded, and how the aftermath unfolded.

Those were the days before the internet. Online news was limited to a couple of places including The Source, a predecessor to AOL. Reporting was difficult but there were sources at the Department of Energy, the Nuclear Regulatory Commission, the State Department, and in Congress. The picture came together, piece-by-piece, day-by-day, week-by week.

Now, 30 years later, we know quite a bit more about Chernobyl. No immediate civilian fatalities occurred, but as many as four dozen (the number is subject to contention) brave first responders — plant workers and firefighters — died gruesome, early deaths from radiation poisoning. Authorities evacuated a large population (some 115,000 people). The terrain remains largely unpopulated today, although wildlife appears to be thriving. The costs continue in terms of the ongoing efforts to entomb the radioactive hulk in a concrete coffin, the second approach to burying the radioactive wreckage. The first sarcophagus, a slapdash lump of concrete and steel, failed. 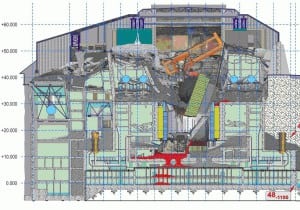 We also know the root cause of the plant’s explosion, an unintentional dirty bomb that spread radiation over much of Western Europe. The graphite-moderated, water-cooled reactor (designed to make both civilian electric power and weapons-grade plutonium) had an inherent flaw: a positive void coefficient of reactivity. If the plant lost coolant, the still-moderated nuclear reaction increased exponentially. That’s unlike Western and other Russian light water reactors, where the coolant and the moderator are the same. A loss of coolant in a light-water reactor shuts down the nuclear chain reaction as the moderator also vanishes and the chain reaction halts. Of course, dealing with the heat left behind is a major safety issue, as was the case at Three Mile Island.

When Chernobyl plant technicians performed an ill-advised, low-power experiment that April, they lost control of the machine. The plant lost coolant and went into a wild power excursion. The graphite moderator continued allowing the core to fire slow neutrons. The reactor went prompt critical; the heat and water produced a steam explosion; the top of the reactor vessel blew off. The graphite caught fire and spewed high into the atmosphere. Talk about a carbon footprint.

Today, the only remaining operating reactors of the Chernobyl “RBMK” type are in Russia, operating with significant safety upgrades. The last RBMKs outside Russia, two 1500-MW Ignalina units in Lithuania, closed in 2004 and 2009. Russia has eschewed any new RBMK units, preferring safer pressurized water reactors.

Because of the dual weapons and power missions of the RBMK design, the Soviet Union only built them in what it believed were its closest satrapies, such as Ukraine and Lithuania, both now independent, mostly Western-oriented countries. For the rest of its satellites, the Warsaw Bloc countries, Russia supplied conventional PWRs (VVERs), which can’t be easily diverted to make nuclear bombs, which could have been turned against the Russians. Western nuclear wags often referred to the VVERs  as “Eastinghouse” reactors, as they closely resembled U.S.-designed Westinghouse PWRs.

Chernobyl had one positive outcome. It contributed to the downfall of the Soviet Union. Communist Party ideology rested on the notion of the perfectibility of “Soviet man;” that Communism would turn humans into ideal social machines, leading to technical and economic advances capitalism could never match. With Chernobyl, that concept was blown to bits.

After Chernobyl, Soviet Premier Mikhail Gorbachev was forced to acknowledge to the world that the Soviet system was built on ideological sand. The International Atomic Energy Agency commented 10 years ago, “Chernobyl was a major catalyst in triggering the chain reaction of events that would soon lead to the disintegration of the Soviet Union.”

What are the lessons we have, or should have, learned 30 years after this horrendous nuclear disaster? For me, it’s attitudinal. The assumption that nuclear technology is inherently benign is dangerous, although insidiously attractive. In the history of civilian nuclear power – from about 1956 (Britain’s Calder Hall) to today – we have seen at least five more “black swan” nuclear events, accidents deemed so improbable that they weren’t worth caring about very much, despite the potential enormous costs. Those were the 1957 Windscale graphite fire in Great Britain, the 1975 Browns Ferry fire in Alabama, Three Mile Island in March 1979, Chernobyl in April 1986, and Fukushima in March 2011, advancing not only chronologically but also in magnitude.

Hubris is the greatest threat to nuclear safety.