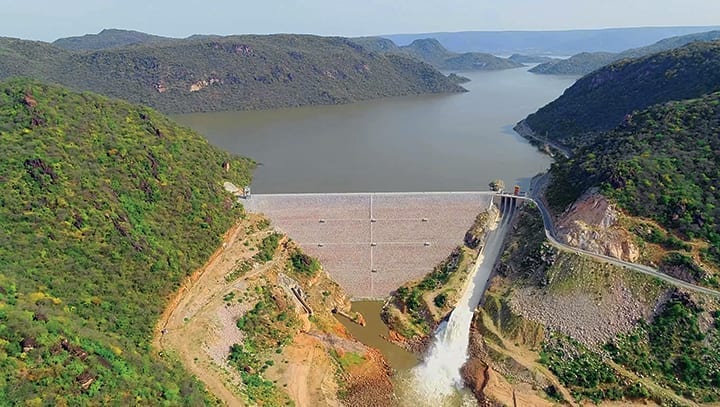 The government of Ethiopia has set a goal of providing access to electricity to all its citizens by 2025. It still has a long way to go, but projects such as the Genale Dawa III hydropower station are helping it get closer to the target. That’s one of the reasons Genale Dawa III is a POWER Top Plant.

The population in Africa is among the fastest growing and youngest in the world. The International Energy Agency (IEA) has reported that 1-in-2 people added to the world population between today and 2040 will be in Africa. The continent is expected to overtake China and India, and become the world’s most populous region by 2023. By some estimates, more than half a billion people are expected to be added to Africa’s urban population by 2040.

Let’s take a moment to digest that. New York City, which includes the boroughs of Brooklyn, Queens, Manhattan, the Bronx, and Staten Island, is the most populous city in the U.S. Its population was estimated to be 8,336,817 in 2019. That basically means, on average, three cities the size of New York City will be added to Africa every year from now through 2040. Of course, those people will ultimately be added in a less-conspicuous manner in many cities throughout the continent rather than in new cities the size of NYC, but the magnitude of the population growth is mind-boggling.

Why that’s important to the power industry is because growing urban populations mean growing energy demand. According to IEA data, more than 510 million people in sub-Saharan Africa still do not have access to electricity today. Despite progress in some countries, current and planned efforts to provide access to modern energy services have barely outpaced population growth.

Ethiopia is a case in point. More than 50 million people in Ethiopia, population 110 million, lack access to electricity. Still, it was cited by the IEA as one country that has made progress. While actively pursuing rural electrification for years, Ethiopia officially launched its National Electrification Program in November 2017, which aims to achieve 100% electrification by 2025. Significant generating capacity additions will be needed to help reach that goal. The IEA reported about 1 GW of geothermal and 2 GW of wind energy are expected to be added by 2030, but the key component of the electrification effort revolves around hydropower. About 22 GW of hydro is expected to be added in the next 10 years.

The Genale Dawa III (GD-3) hydropower project, located in southern Ethiopia on the Dawa River, some 630 kilometers (km) from the capital Addis Ababa, is one piece of the puzzle. The project is owned and operated by Ethiopian Electrical Power (EEP). Stantec provided engineering, procurement, and construction (EPC) contract management consultancy services.

GD-3 has an installed capacity of 254 MW (Figure 1). Three vertical Francis turbine generators, each with a generating capacity of 84.7 MW, are housed in one large underground cavern, while the transformers are housed in an adjacent one, with power cables extending to an external switchyard via an inclined tunnel.

The concrete-faced rock-fill dam (CFRD) is 110 meters (m) high with a crest length of 456 m. Rockfill volume is some 3.22 million m3. The gated spillway comprises an ogee section leading to a 250-m-long chute ending in a flip bucket, designed for a maximum discharge of 1,880 m3/second. Three radial gates—6 m wide by 9.065 m high—were installed to maintain the reservoir level at an elevation of 1,120 m above sea level and release large floods when they occur, most years.

During construction of the dam, a diversion tunnel handled river flows. It was 500 m long, 9 m high by 7 m wide, designed to accommodate flows of up to 813 m3/second under a head of 94 m.

A 60-m-high power intake structure was constructed on the left bank of the river about 600 m upstream of the dam. It includes one large vertical sliding gate guarded by trash racks. It forms the entrance to the headrace tunnel, which is 12.4 km long with a diameter of 8.1 m. A tunnel boring machine (TBM) was used to excavate 8.9 km of it, while the rest was done by traditional drill and blast in the location’s very hard granite.

The tunnel leads to a 120-m-high surge tank, and then a 188-m-deep concrete-lined vertical shaft, 70 m of concrete-lined horizontal pressure tunnel (6.7 m diameter), 130 m steel-lined penstock (4.8 m diameter), and 2.6-m-diameter manifold leading to the powerhouse. Water returns to the river via a 768-m-long tailrace tunnel, 6.7 m diameter partly concrete-lined, and a 480-m-long open channel lined with masonry (or concrete where stability was a concern).

Located at the GD-3 main regulated dam, the reservoir inundates about 115 km2 of land. Out of this, some 70 km2 was swamp, and most of what remained was covered by rainforest and bush, which was mostly cleared before reservoir filling.

An International Slate of Project Participants

The pre-feasibility and feasibility studies of the GD-3 hydropower scheme were performed by Lahmeyer International (LI) of Bad Vilbel, Germany, in association with Yeshi Ber Consult (YBC) of Addis Ababa, Ethiopia. Construction of the project was carried out by CGGC (China Gezhouba Group Co. Ltd.) through an EPC contract. The turbines and generators were manufactured and installed by the Dongfeng Electric Co. of China. TUNNELPRO—formerly known as SELI—an Italian supplier of underground equipment for the mining and construction industry, provided the TBM equipment through its Chinese subsidiary.

Stantec was appointed as the employer’s representative, providing contract management consultancy services for the EPC, including services during the “defect’s liability period.” The company also facilitated the “transfer of knowledge” and “training through observation” including field activities, mentoring, coaching, and classroom workshops with practitioners. One important way Stantec helped enhance EEP managers’ capabilities was by hosting a two-week formal management and in-depth technical training program in Chicago, Illinois, for nine of EEP’s leaders.

The first contract, which was for the pre-feasibility and feasibility studies of the GD-3 hydropower scheme, was signed between Ethiopia’s Ministry of Water Resources and the consultants in 2003; the feasibility report was issued in August 2007.

The EPC construction contract was signed on Sept. 23, 2009, but work on-site did not commence until about mid-March 2011. TBM excavation commenced in late August 2013, and finally broke through to complete the excavation of the headrace tunnel on Oct. 29, 2016, after boring through some very hard gneiss, schist, and granite, as well as isolated highly fractured areas. 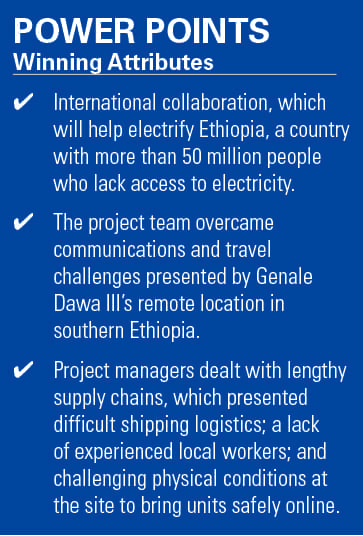 Construction of the dam and spillway began in January 2013. The dam was completed in September 2016, while the spillway was finished in January 2017. Impounding the reservoir was originally planned to take place in February 2017, but was delayed for two years until resettlement compensation negotiations were concluded. Impounding finally commenced on Feb. 28, 2019.

Although exact workforce statistics are hard to quantify due to the number of contractors and duration of the work, Stantec’s Ethiopia Operations and Commercial Manager Aklile Gessesse said that at its peak, some 450 Chinese and 800 Ethiopian workers contributed to the project’s success. Stantec field staff averaged four to five expatriates on-site and 12 Ethiopian engineers throughout the project.

The remoteness of the site made staffing a challenge. “Training the future plant operators was a top priority from the start of the project,” Gessesse told POWER. “From the beginning, our technical capacity building approach put our local partners at the center of the process, enabling them to address their own concerns while Stantec mentored and facilitated the process. Training took place throughout, and the Stantec team took great care to ensure a smooth transition.”

The length of supply lines and remoteness of the project were among the many challenges faced by the construction team. Some 8,300 km of sea separates Shanghai, China—where many shipments originated—and Djibouti, the receiving port. Then, equipment had to be transported 1,300 km overland to the site. The site’s remote location also made communications difficult.

“The remote location of the site, poor internet service, and no phone lines were certainly a challenge to the project early on,” said Gessesse. “As the project progressed, a mobile phone service was set up, which greatly helped communication.”

Travel was challenging too. Helicopters were not permitted to fly to the project site for non-emergencies, and getting to the project from other parts of the world could take days. The nearest hospital was a six-hour drive from GD-3, so the team developed an air evacuation plan in case of a medical emergency.

“A major variation to the work was introduced early on in the project, when it was decided to upgrade the project switchyard and transmission line from 230 kV to 400 kV,” Gessesse said. Negotiations over the increased cost of the work continued for several years and caused construction delays.

The plant was officially inaugurated on Feb. 4, 2020. The first two generating units commenced commercial operation in February and March 2020, respectively, with overall completion now expected before year-end. While the project is still in its early operational stages, the first two units have been performing well, running at full capacity with virtually no problem for approximately six months.

“We are thrilled by the early results,” Gessesse said, adding that Stantec’s team plans to continue assisting EEP with testing and other support work until at least September 2021.

Completion of the GD-3 project will increase the overall power capacity in Ethiopia by nearly 6%—from 4,260 MW to 4,514 MW—contributing to the government’s goal of increasing nationwide capacity to 12,000 MW by 2025. As such, the project is recognized as a POWER Top Plant award winner for, among other successes, providing much-needed power to help electrify Ethiopia. ■