Australia, the world’s second-largest exporter of thermal coal and uranium, and a significant exporter of liquefied natural gas (LNG), faces inevitable electricity rationing and the threat of blackouts unless the government acts urgently to ensure large-scale investments are made in new power-generating capacity, experts from five nations said in April.

The delegates agreed that Australia’s energy security requires a major increase in baseload electric power generation capacity to meet the expected growth in demand. That growth would emerge independent of climate change and despite a much greater current focus on energy efficiency and conservation measures, they said.

The Australian government is considering implementing by 2010 a carbon emissions trading program that would target cuts of 60% from 2000 levels by 2050, and meet a medium-term national target to reduce emissions between 5% and 15% by 2020. The program is thought to be the world’s broadest, covering 75% of carbon emissions ranging from transportation operators and aluminum makers to gas producers and refineries.

The nation’s power generation sector will be hardest hit, ATSE said, because more than 80% of Australia’s electricity supply is derived from coal-fired generation (Figure 4). From 2006 to 2007, the remaining 12% was produced from natural gas, 6% came from hydropower, and less than 1% was generated from oil and other fuels. 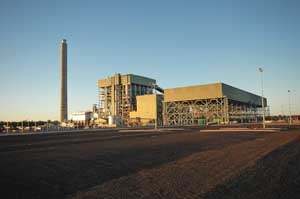 4. A basic dilemma. More than 80% of Australia’s power is produced by coal-fired power plants, like CS Energy’s 750-MW Kogan Creek (shown here) in Queensland—the largest single unit generator in Australia. Within the next two years, the Australian government is poised to introduce a 20%-by-2020 renewable energy target as well as a cap-and-trade program to cut carbon emissions. Engineering groups contend that this would severely jeopardize the nation’s electricity security, because it would limit baseload power to a portfolio of a few technologies, all with problems. Courtesy: CS Energy

"Under these conditions sustainable new base load power is limited to a portfolio of a few technologies, all with problems," ATSE said. "[Carbon capture and storage] and geothermal technologies are still far from commercially proven; remaining hydro resources are inadequate and current government policy prohibits nuclear." At the same time, the government intends to introduce a renewable energy target this summer that would ultimately quadruple renewable energy to constitute 20% of Australia’s generation portfolio by 2020. But that would pose a problem in the short term, ATSE said. "Intermittent renewables cannot yet provide economic base load power due to their intrinsically poor capacity factors. Energy storage may in the longer term help overcome this problem but costs are still very high."

Australian power supply concerns have also been voiced by the Energy Supply Association of Australia (ESAA), a business group that seeks to influence policy decisions, though its focus is on the economic climate. It claims that the industry will need to secure almost A$100 billion in refinancing and new capital expenditures over the next five years to begin the transition to a lower-emission energy supply system and, at the same time, ensure security and reliability of energy supply. According to the group, electricity generators will need an estimated A$20 billion added to refinancing and capital expenditures to finance emissions permits in the period to 2014.

"The relative attractiveness of energy sector assets has been severely impacted by the effect the proposed [carbon trading program] will have on the balance sheets of electricity generators and the draft decision by the Australian Energy Regulator to cut the rate of return on network investments," ESAA CEO Clare Savage said in a statement in April. "When you combine the effects of these two decisions with the debt guarantees being offered to other sectors, it is tantamount to tying one hand behind the industry’s back while it fights for capital in the midst of a global financial crisis."

Qualms about Australia’s future power supply come on the heels of two massive blackouts in inner Sydney, which were blamed by power provider Energy Australia on a power surge that triggered an emergency system shutdown. They also follow a less-publicized March 2009 report from the government’s National Energy Security Assessment, which claims that the level of electricity security over the next 15 years will be "moderate." The report stressed that, although electricity markets in Australia are well-developed, "significant challenges exist in terms of exposure to supply-side shocks." These include uncertainty about climate change policies, drought in southeastern Australia, and the increasing reliance on gas supplies. "Current market arrangements, including architecture and structure issues, are limiting the capacity of the market to absorb such shocks and respond in an efficient manner," it said.