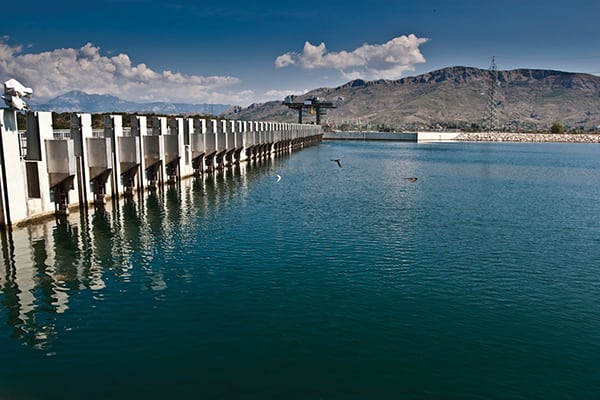 Retrofitted to the outlet of a 30-year-old reservoir, the two-stage, 53-MW, 90-turbine Ashta Hydropower Plant on the Drin River in northwest Albania is a textbook example of how innovative run-of-river hydropower projects are harnessing latent generation worldwide. Courtesy: Energii Ashta

Like many small countries, Albania is dependent on a specific generation type for the majority of its electricity. In the case of this mountainous nation of 3 million people, it’s hydropower. Roughly 98% of its annual domestic generation comes from hydroelectric generating plants, mostly concentrated on the Drin River in the country’s north.

The Albanian power sector has faced serious challenges over the past few decades. Once a net exporter of electricity, it has been forced to import power as demand has grown, because almost no new capacity was added between 1990 and 2010. This dependence on hydropower, which constitutes about 95% of its 1.7 GW of total installed capacity (the remainder is accounted for by a few small thermal plants), also means generation constraints during dry periods. In a number of instances, prolonged droughts have caused rolling blackouts.

Albania’s growing economy has exacerbated the power deficits. Since transitioning from a centrally planned economy to an open market during the 1990s, the country has experienced substantial growth (though also some periods of turmoil). This has naturally meant a strong increase in electricity demand.

According to World Bank statistics, the Albanian power sector suffers from an unfunded deficit of about $550 million and commercial and technical losses of about 42% due to an antiquated grid, electricity theft, rampant nonpayment, and poor collection rates. Ongoing reform of the electricity sector is intended to address these problems, but experts agree the difficulties are large.

Though there is clearly a need to diversify Albanian generation resources, and efforts to develop new thermal, wind, and solar capacity are under way, the fact remains that the nation’s largest potential resource will remain hydropower for the foreseeable future. Estimates are that only 35% of its hydroelectric potential has been exploited, but the delay in bringing major hydroelectric projects online is a deterrent.

Instead, since the late 2000s, Albania has been focused on building small hydropower plants under 100 MW, with about half the capacity being built under foreign concessions. Much of the initiative is intended to increase generation capacity in the southern end of the country, but it is also intended to further exploit potential on the Drin River—the nation’s longest—where 95% of its capacity is located.

The lowest dam on the Drin is at Vau i Dejes, about five miles southeast of the city of Shkoder, where a 250-MW hydroelectric plant has operated since 1973. But because the dam harnesses only part of the Spathara Reservoir outflow, there remained unexploited flow between the reservoir and Lake Shkoder, where the Drin joins the Bojana River.

Albanian officials had identified this stretch of the Drin as a possible site for future hydropower development in the 1990s, but existing hydroelectric technology at the time would not have resulted in an economic project. Not until the development of modern run-of-river generation technology in the 2000s did the idea finally show promise.

In January 2008, the Albanian government put out a call for tenders, and in September signed a concession agreement with Austrian firms Verbund and EVN. Verbund is one of the largest hydropower producers in Europe, and EVN also has substantial hydroelectric assets. The €160 million deal was the first large-scale hydropower plant concession contract in Albania signed with a foreign firm.

Under the agreement, the plant would be owned 50/50 by Verbund and EVN. All of the power would be purchased by the state-run Albanian electricity company Korporata Elektroenergjetike Shqiptare (KESH) under a 15-year contract. After the expiration of the power purchase agreement, the term can be extended or, if not extended, the power can be sold on the open market. After 35 years, the facility will revert to the Albanian government.

Verbund and EVN formed a joint venture company, Energji Ashta, to oversee the project. Permitting was completed in less than a year. Ground was broken in May 2009, with formal construction beginning in March 2010. Full project financing was completed in December.

The Ashta Hydropower Plant was built in two phases. Ashta 1 was built below the existing plant, at the bottom of the reservoir’s effluent weir. Ashta 2 was built 5 kilometers downstream. To minimize impact on the local watershed, the plants were not built across the existing river; instead, a lined headrace channel was built parallel to the riverbed. Below Ashta 2, a tailrace channel eventually rejoins the river.

Because the site could not have been economically developed using conventional hydroelectric turbine technology, the innovative design instead employed modular Hydromatrix turbine generators from Andritz (Figure 1). The Hydromatrix is an axial-type propeller turbine using a bulb-style, synchronous, permanent-magnet generator. These compact turbines enable the use of slower currents and lower heads: Ashta 1 has a head of 4.98 meters while Ashta 2 has a head of 7.53 meters.

Hydromatrix turbines are shipped as prefabricated modules, each comprising a single turbine generator, allowing them to be installed directly into an existing watercourse with minimal site work.

Each phase of Ashta employed 45 of them, making Ashta the largest Hydromatrix-based plant ever built. As installed, each Hydromatrix turbine can be taken in or out of service individually, or raised out of the water for maintenance, without affecting operation of the other units.

The first turbine was installed in August 2011, with the channel completed and flooded the following April. Test operations started thereafter, with the first electricity fed to the grid in June 2012. Ashta 1 was completed and inaugurated in September, with Ashta 2 commissioned the following March. The project officially began supplying power to KESH in April 2013, with final completion declared in July—a rapid pace of less than three years from start of construction to operation. Total project cost was just over €200 million.

The Ashta project was constructed to comply with the requirements of the Clean Development Mechanism (CDM) under the United Nations (UN) Framework Convention on Climate Change, and was registered and approved for the CDM in August 2012. According to the UN, the CDM allows emission-reduction projects in developing countries to earn certified emission reduction credits, each equivalent to 1 metric ton of CO2. These credits can be traded and sold, and used by industrialized countries to meet a part of their emission reduction targets under the Kyoto Protocol. The mechanism is designed to foster sustainable development and emission reductions, while giving industrialized countries flexibility in meeting emission reduction targets. Ashta is certified to avoid 78,989 metric tons of CO2 annually.

In its first year of operation ending in March 2014, Ashta generated a total of 267 GWh, exceeding its projected average by 11%. It has also experienced no lost-time accidents or unplanned outages.

For demonstrating the speed of development and possibilities of modern run-of-river hydroelectric generation, Ashta is a worthy POWER Top Plant. ■