The scope of work includes full plant specifications and design of plant facilities and buildings. This will provide UniStar with the information needed to make important decisions about plant equipment purchases and construction site preparations, should a final decision be made to build a plant.

The design, AREVA said, will benefit from any experience gained from four EPRs under and near construction: one in Finland, one in France, and two in China. In the U.S., UniStar Nuclear Energy and two of its partners, AmerenUE and PPL, are developing plans for U.S. EPRs in Maryland, New York, Missouri, and Pennsylvania.

AREVA added that it "is reinforcing its readiness for the next wave of plants" by aggressively recruiting hundreds of engineers and technical experts. It said that more than 200 engineers were hired last year.

Later in October, the French nuclear firm said it would join forces with global defense and technology company Northrop Grumman Corp. to jointly build a new facility in Newport News, Va., to engineer and manufacture heavy components for the U.S. EPR (Figure 8). 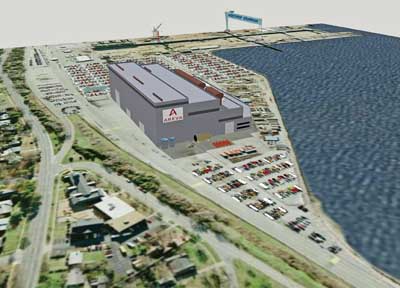 The new 300,000-square-foot facility will cost about $360 million. When completed in 2011, it is expected to be the first full-scale manufacturing facility dedicated to supplying heavy components, such as reactor vessels, steam generators, and pressurizers to the U.S. nuclear energy industry.

AREVA has been manufacturing heavy components for the global commercial nuclear industry for more than 30 years at its Chalon/St. Marcel plant in France. The company is already working with Lehigh Heavy Forge in Bethlehem, Pa., to produce forgings for the U.S. EPR.

AREVA’s partner, Northrop Grumman Shipbuilding, will provide its heavy industrial engineering and manufacturing expertise required to build U.S. Navy nuclear ships to the venture, the companies said. Along with its skilled workforce, Northrop Grumman has existing transportation access via the James River to deliver heavy components.