Three years ago, Dennis Quinn, president of what was then Seattle-based Celerity Energy, proposed to San Diego Gas & Electric Co. (SDG&E) that it develop a “Clean Gen” program designed to upgrade 25 MW of existing backup generators to support the grid during times of peak demand. Recognizing the value of the Clean Gen program, in terms of both an operating cost perspective and its ability to positively affect SDG&E’s environmental impact, the utility accepted Celerity’s proposal.

The Clean Gen program aggregates existing backup generators and operates them during periods of peak demand to support the electric grid and minimize blackout risk. Shortly after partnering with SDG&E, Quinn and the EnerNOC team signed contracts with several end users to enroll their backup generators in the program. However, before it could move forward, emissions had to be addressed with San Diego County’s Air Pollution Control District (APCD).

The APCD had concerns about 25 MW worth of backup generators operating more hours than their then-current permits would allow because of the potential negative impact on San Diego’s air quality. The APCD and EnerNOC worked to identify filters that would allow the generators to emit the same amount of particulate matter or less in 200 hours as they would have emitted in the normally permitted 30 hours of operation per year.

Quinn and EnerNOC agreed to install California Air Resources Board–approved diesel particulate filters (DPFs) that would reduce particulate matter emissions by over 85% (Figure 1). Another important benefit of the DPFs is that they significantly reduce carbon monoxide and hydrocarbon emissions. In addition, recent California regulations require the exclusive use of ultra-low-sulfur diesel fuel. 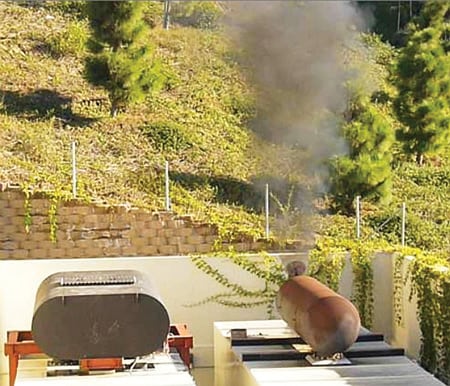 Generators save the day

The University of San Diego (USD) was the first to come on-line in November 2006 with three 2,000-kW diesel-fired Cummins generators. Not only does USD get payments for the use of its generators, but EnerNOC also has taken over responsibility for ongoing generator maintenance, which, according to Roger Manion, assistant vice president, facilities management at USD, gives the university a greater sense of security that its generators will operate when needed. In addition, USD is also notified when the grid is at risk, which is important information for the managers of a 7,600-student campus.

When an event is called, USD does not notice the transition because the generators run parallel with the grid. If there is a blackout despite an event being called, USD won’t notice because it will already be running on backup generators. According to Les Young, senior project manager at EnerNOC, “This is a great aspect of the program because USD is not subject to a momentary outage if a program event is called or the grid fails during an event.”

The San Diego County Water Authority’s (SDCWA’s) Olivenhain Dam facility in Escondido, Calif., also enrolled its four 2,000-kW Caterpillar diesel generators in the program (Figure 2). These generators, normally used to provide power to the facility’s three 2,500-hp water pumps in the event of a power failure, are the perfect fit for the program: they’re big, powerful, and willing to work. They are also set up in parallel with the grid, so there is no interruption if a program event is called or the grid blacks out. 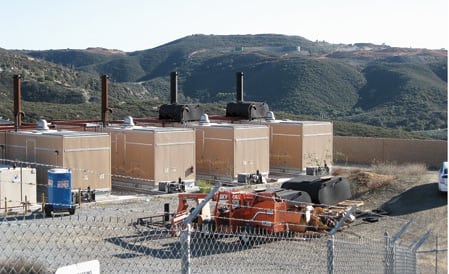 2. Mighty generators. In this construction photo of Olivenhain Dam’s four 2,000-kW Caterpillar diesel generators, the two generators on the right have the new filters installed; the gensets on the left are awaiting the upgrade. Courtesy: EnerNOC

EnerNOC didn’t stop with the USD and SDCWA sites; it went on to include several diesel generators from various San Diego area wastewater treatment plants. All those generators had open transition transfer switches that would not allow EnerNOC to use the full potential output of the generators, because the loads running on the generators were only a percentage of their nameplate ratings. As a result, EnerNOC designed an innovative “wrap around” breaker system to parallel the generators with SDG&E. According to Young, this system picks up the facility load and then exports the excess power back to the utility.

The “NOC” in EnerNOC

Tim Healy, EnerNOC’s chairman and CEO, is proud of the company’s accomplishments. When SDG&E calls an event, Healy’s team in Boston at EnerNOC’s Network Operations Center—the “NOC” in EnerNOC—springs into action (Figure 3). The NOC sends automated dispatch information to all designated facility managers informing them that their engines will be remotely fired within 2 minutes. NOC operators then initiate the event, which automatically notifies customers and remotely starts their generators. Within minutes, clean, permitted generators from numerous sites remove 25 MW of load from the grid and help SDG&E avoid blackouts and brownouts. 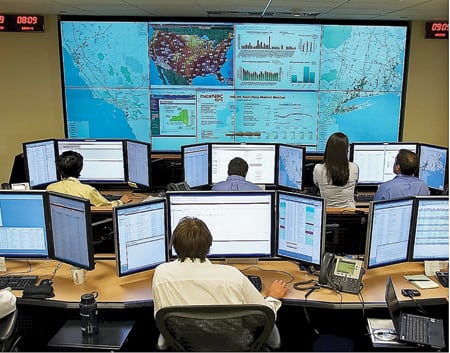 3. The “NOC” in EnerNOC. EnerNOC’s Network Operations Center in Boston is a state-of-the-art facility that can dispatch thousands of assets across the U.S. and Canada. The NOC is staffed 24/7/365—much like an ISO control room. Courtesy: EnerNOC

SDG&E can call an event during specified hours on any Monday through Saturday, including holidays. However, there is a limit on the total number of hours per year that SDG&E can use Clean Gen.

“Remotely firing the engines is an added service we provide,” says Healy. “In other parts of the country it is not required that the generators start so quickly, so we offer our customers the option of firing the generators up themselves or having us start them remotely.” Because EnerNOC has invested millions of dollars in its software to power the NOC, it is not only capable of starting an engine in San Diego with the click of a mouse in Boston, but the NOC can also track and analyze electricity usage and manage demand response events for thousands of locations across North America simultaneously (Table 1).

Table 1. Demand is skyrocketing. All across the country electricity demand is increasing as a result of economic growth. In order to keep pace with this demand, certain utilities and independent system operators (ISOs) are finding that demand response programs help address the problem. Source: EnerNOC

On October 24, 2007, the EnerNOC program was put to the ultimate test. In response to electricity shortages caused by multiple wildfires in southern California, the California Independent System Operator declared a state of emergency. With the overall electricity supply in jeopardy, the NOC was notified and, within minutes, the Clean Gen program was supplying approximately 17 MW of electricity to the grid. This event wasn’t the first time the program had been called into action, but it was the first time in an emergency situation, and the results strongly validated the program.

“The Clean Gen program functioned just as it was designed to, helping us to meet our needs for increased electricity production through a system of aggregated back-up generators,” said Matt Burkhart, vice president of electric and gas procurement for SDG&E. “The rapid response of the EnerNOC team was especially impressive and helped us address the situation before the threat of brownouts became a serious concern.”

With field-proven effectiveness, even under emergency circumstances, programs like Clean Gen offer an innovative, economic approach to tackling peak demand crises. According to Healy, “A 100-MW aggregated backup generator program is cheaper to build, cheaper to maintain, has no transmission losses, and takes just a few months to build. On the other hand, a gas peaking power plant can be 60 times the capital cost, be more expensive to run, and take three years to build” (Table 2).