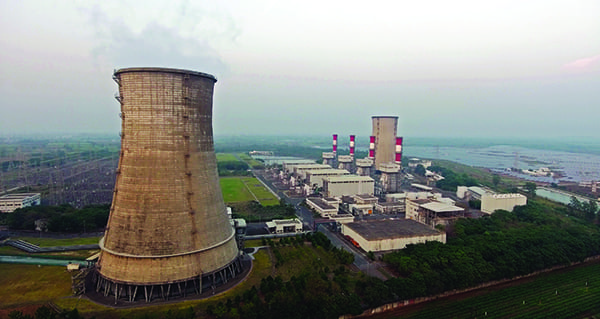 Built and developed in accordance with the principles of vaastu shastra, the 1.5-GW “mega” gas power plant in India imbues positivity and proactivity into all aspects of plant operation. It has resulted in world-class achievements that make it a remarkable POWER Top Plant winner.

For thousands of years, South Asians have built structures and planned towns in accordance with the principles of vaastu shastra, which are detailed in the ancient Sanskrit text of the Vedas. Underlying vaastu is an intricate Hindu philosophy, which holds that people are influenced by cosmic energy and their existence—and their well-being, health, happiness, and prosperity—flourishes when they are in harmony with other natural cosmic elements. This complex interrelationship is in constant engagement with the forces of nature, including from five basic elements—air, water, earth, fire, and sky. It is also influenced by the roving stars and the planets, which is why vaastu fuses the rich elements of Vedic-era science, art, astrology, and astronomy to prescribe directions in which a building should be laid out to best achieve harmony with nature.

Far from being a forgotten cultural relic, vaastu still forms the basis of site selection, site planning, and design for Indians everywhere—so much so that civil engineering firms often hire specialized vaastu consultants to help incorporate its principles into the design planning of small structures like houses, to shopping malls and factories. But rarely in a power plant.

Asked why Torrent Power, one of India’s few fully integrated power companies, decided to incorporate vaastu into the planning of the 1,530-MW natural gas–fired SUGEN Mega Power Plant—knowing that it could complicate siting and equipment placement—Torrent Executive Director L.N. Lalwani replied that beyond principles governing physical order, vaastu pervades into the psychological and spiritual order of the plant’s day-to-day work culture. “Vaastu is about positive energy and proactivity—that is, harnessing the resources you have to best perform in total harmony with your natural surroundings,” he said. 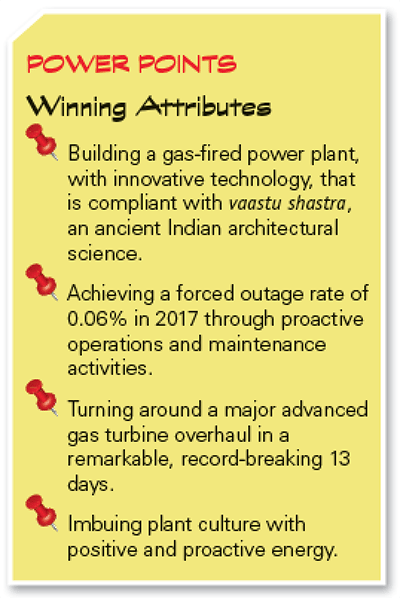 From its inception in 2005, the SUGEN combined cycle power plant was destined to be a one-of-a-kind project. Sited near the sprawling port city of Surat, on the western coast of Gujarat state, India, the plant is today the largest private-sector gas-based power project in a country that produces nearly 60% of its power with coal. Though India’s 26 GW of gas-based capacity makes up only an 8% share of its total power mix, flexible gas capacity is becoming increasingly important to balance the country’s growing solar and wind additions, according to data from the Central Electricity Authority. However, production and supply of natural gas has not kept pace with growing demand. This has forced existing gas power plants to operate at a plant load factor of only about 23%. Nearly 7.5 GW is “lying idle,” the government admits.

SUGEN consists of four blocks, each equipped with a 382.5-MW Siemens SGT5-4000F advanced-class gas turbine, a steam turbine, and a common generator connected in single-shaft configuration, along with a heat recovery steam generator. Support systems include a water intake well, natural-draft cooling towers, an effluent treatment plant, and a water treatment plant.

According to Lalwani, the project was developed as part of a commitment with government that required Torrent, a distributor to the economically booming region, to develop a power plant to ensure supply. The decision to build the massive gas plant was based on the potential of a newly discovered gas field in the Krishna Godavari basin in southern India in the early 2000s. While that potential did not pan out to its full capacity, and the sparse gas produced from the basin was eventually increasingly routed to fertilizer plants and city gas distribution portals, Torrent secured a short-term agreement for domestic supply though a pipeline owned by Gujarat State Petronet Ltd. Today, domestic gas makes up only about 10% of its supply, while the remainder comes from imported liquefied natural gas, which is re-gasified in India.

But gas was still the right choice, Lalwani said, mainly because the fuel is clean, an attribute that is valued even more today. A decade ago, Torrent also had access to a multitude of combined cycle technology options, he noted. Company officials ultimately chose to pursue a single-shaft configuration—which wasn’t as technically mature at the time—after much analysis and planning. “Efficiency-wise, in those days, it was very good,” Lalwani said. “We were concerned about its reliability, but we did our due diligence and gained the confidence we needed.”

Engineering, procurement, and construction contractor Siemens also agreed to collaborate with a specialized consultant hired by Torrent to help design the project in accordance with vaastu principles. Vaastu ordained that the “fire” entity (the turbines) be located in the southeast; the “water” body (a water reservoir) is in the northeast; and the “earth” body (cooling towers) is in the southwest. The northwest, which embodies the “air” element has no structures, but features landscaping. Even though siting the plant entry in the south would have been easier, it is in the north, about 2 kilometers away, in compliance with vaastu to attract positive vibrations. The administrative building is sited beside an ancient banyan tree, which is revered in Hindu culture as a symbol of wisdom. “It was a good challenge for the consultant and the Siemens layout designers,” Lalwani said, noting that the project began operation on time and on budget, without pressing technical issues, in 2009.

At the center of the plant plot area, per vaastu principles, Torrent erected a spiritual energy center, a facility where all workers pray or meditate for a few minutes before work begins and before they leave again in the evening. That element has served to unify the workforce and instill a sense of positivity, proactivity, and productivity. The approach also mirrors a key tenet of its specific plant culture.

For example, management rigorously implements an operations and maintenance (O&M) initiative it calls “proactive action to anticipated problems” or PAAP, in which O&M experts meet every week to discuss major threats to power availability, including single-point failures, and to brainstorm possible proactive actions to thwart these threats. “So, there are many modifications we have done, not only in the control system but also in its mechanical parts, with the aim that a single component should not be tripping up the unit or cause costly redundancies,” Lalwani said.

Lalwani noted that O&M proactivity was also a major focus during the project’s planning and construction phases. “An operability study and single-point failure analysis was carried out for the entire plant, and all identified weaknesses were suitably mitigated,” he said. Some key changes, perceived by in-house engineers through experience and foresight, required convincing the original equipment manufacturer to change its conventional plant design, even if it resulted in higher initial costs. However, this approach has been wildly successful. “In 2017, the forced outage rate of SUGEN was 0.06%,” Lalwani said. “I’m really proud of that,” he said, noting it is one of the only metrics that adequately measure O&M performance. “You cannot believe how difficult it is to achieve such a low rate of unscheduled outages for a 10-year-old plant.”

Owing to the gas plant’s technology—which was groundbreaking in India at the time—Torrent also prioritized training, sending some staff to Germany to ensure seamless operation and to aid design measures. Torrent also introduced a “position qualification system,” in which engineers are tested before being tasked with plant assignments. All tasks at the plant are performed by in-house engineers—except for long-term service contract jobs executed by Siemens. Safety, also paramount, is proactively pursued, and workers use a computerized maintenance management software for day-to-day O&M activities, including a lockout-tagout system. Over the past five years, SUGEN completed 6.2 million man-hours without incidents, an achievement that garnered it a “Sword of Honour” award in 2012 from the British Safety Council.

A Turnaround of Stunning Efficiency

Earlier this year during an annual turnaround, Torrent engineers wrapped up a post-50,000-Equivalent-Operating-Hours major overhaul of one of its 382.5-MW units in just 13 days for turning gear to turning gear and another two days for attaining baseload output (Figure 1). The feat is a world record for a Siemens turbine, Torrent says. It was only possible “because of meticulous and micro-level planning of all resources,” Lalwani noted. “We have a team that we set up to perform the overhaul, which very meticulously planned all required preventative maintenance, corrective maintenance, and modifications.” The 13-day turnaround is especially remarkable because Siemens estimates this type of outage should take up to 39 days in SUGEN’s long-term service agreement, he said.

The turnaround has served to boost overall plant performance, improving its heat-rate efficiency by 0.7% and baseload capacity by 4.8%. “The SUGEN plant has the distinction of having one of the lowest per megawatt capital costs of generation in the country,” Lalwani said.

Because vaastu is such an integral component of plant culture, SUGEN also puts an extraordinary emphasis on environmental initiatives. Plant developers extended green cover of the project site to 49%—far beyond the legally required 33%—and the site is today covered in an assortment of tropical fruit trees (mango, papaya, coconut, chikoo, and others), as well as fields of organically fertilized rice and wheat, produce that is consumed in plant canteens. The landscaping is irrigated by treated plant effluent. Air quality of the plant is also strictly controlled: its nitrogen oxide levels are less than 20 parts per million (ppm), compared to the legally allowed 50 ppm, and emissions of sulfur dioxide and suspended particulate matter “are almost zero,” Lalwani said.

“At SUGEN, the energy vibration determines how you think and how you perform,” he added. “There is no yardstick to measure the type of difference it has made, but we feel it and we live it.” ■