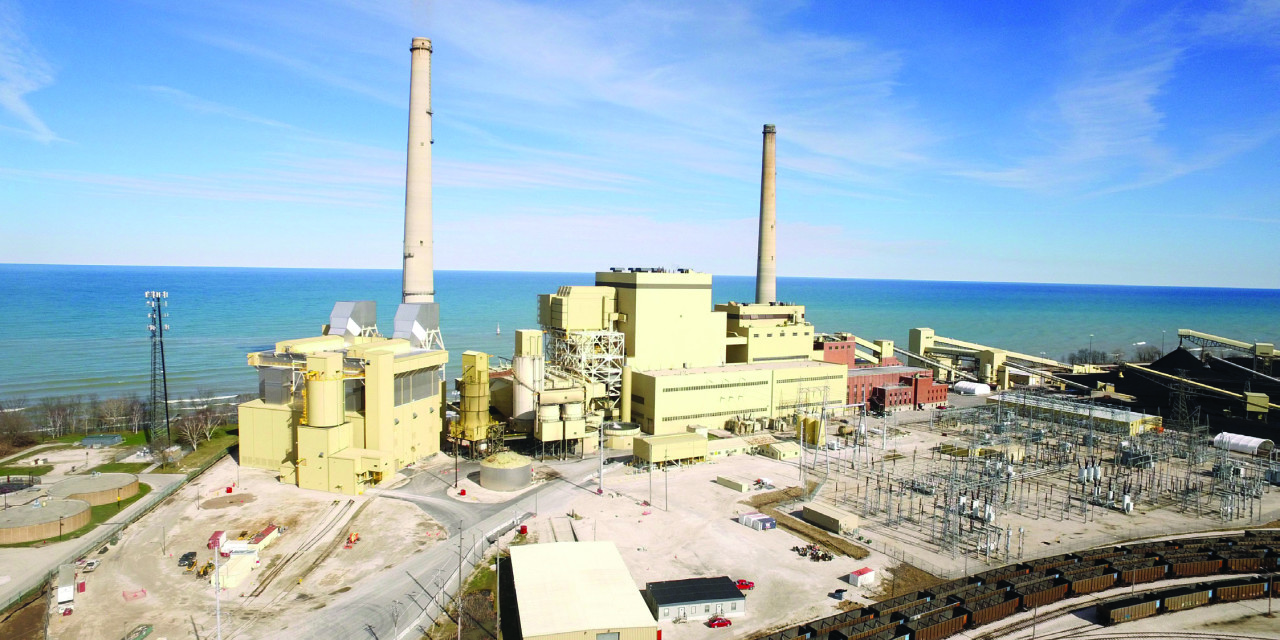 Working on a small patch of land bordered on one side by Lake Michigan and on the other three by the small city of Sheboygan, Wisconsin, the team tasked with the installation of a state-of-the-art air quality control system on Unit 5 of Alliant Energy’s Edgewater Generating Station faced, and overcame, unique challenges.

In the early 2010’s Alliant Energy found itself in a position many utilities can relate too, staring down the barrel of increasing regulations. Alliant subsidiary Wisconsin Power and Light’s (WPL) Edgewater Unit 5 was not going to make the cut under the upcoming regulations, and something needed to be done to keep the plant running. The solution for WPL was to install a state-of-the-art air quality control system (AQCS) on the plant, which was no easy feat considering the extremely small area available for the new scrubber and baghouse system.

“The project was put forth to meet current and future air quality control obligations that were in the queue for sulfur dioxide and particulate matter, as well as to meet other requirements that we had as a company,” Alliant Energy Project Manager Tim Kreft, told POWER.

The AQCS consists of two dry flue gas desulfurization (DFGD) trains, designed and manufactured by Andritz. After its first year of operation, the system has reduced plant SO2 emissions by at least 90%, “equating to a reduction of approximately 7,500 tons (15 million pounds) of SO2 emissions and 60 tons (120,000 pounds) of particulate matter emissions per year,” according to the Alberici Stanley Edgewater Joint Venture, which was contracted for the project under an engineering, procurement, construction (EPC) agreement.

The roughly $230 million project was completed ahead of schedule and significantly under budget and has been operational for more than a year. According to a January 25, 2017, filing with the Public Service Commission (PSC) of Wisconsin, the initial estimated cost of the project was $413,710,000, excluding AFUDC (allowance for funds used during construction). In its latest filing with the PSC, Alliant reported that “[t]he final project costs are expected to be $230,652,557, which includes the cost of remaining project closeout items estimated at $3,038,597.”

The latest filing attributes the dramatic decrease in cost to “a series of factors that include favorable market timing, favorable contracting and procurement strategy and reductions of project scope deemed unnecessary as project engineering progressed.” The filing further notes that “[e]conomic conditions changed for commodity and construction pricing after the authorized budget was developed.”

The project scope was significantly reduced due to the announced retirement of Edgewater Unit 4. Initially, the project was to include additional rail and rail switching capabilities, which were necessary at the time due to the coal and byproduct needs of Units 4 and 5. With Unit 4 off the table, it was determined that no rail enhancements would be needed for Unit 5.

Alliant and the Alberici-Stanley joint venture attribute some of this cost reduction to the stellar working relationship the parties had. One of the ways that the team worked to reduce the project cost was to limit change orders. In fact, throughout the project, there were just seven contractor-initiated change orders.

“I think the view of contractors or teams like this might be that you want to ask the owner for a lot of change orders to make money,” Dieter Bareiss, project director of EPC projects with Alberici, told POWER. “[We] backed it up by saying we don’t want any change orders if we can help it and by showing the owner that we weren’t going to try to nickel and dime them or ask for change orders.” 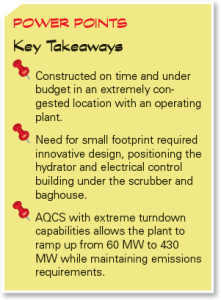 The Edgewater plant is in an interesting position both physically and within the local energy market.

Physically, the plant is very constrained. It sits on a small plot of land located right in the thick of the city. It is bordered by Lake Michigan on one side, a water treatment plant on another, and residential communities on the other two. Because of this, workers constructing the new system had to work in extremely congested conditions. “It was a congested small site and an operating plant, so it was a lot of coordination between the EPC joint venture Stanley and Alberici and the owner on a daily basis,” Tom Lothspeich, Stanley’s chief mechanical engineer, told POWER. “Coordination… I think was one of the more challenging items,” he added.

Because of the small space, the team had to come up with an innovative setup for the new system, placing the hydrator and electrical control building underneath the scrubber and baghouse (Figure 1). Not only did this setup reduce the project’s footprint, but it was also found to have operational benefits as well. “It’s an advantage because all the equipment is consolidated,” Lothspeich said. “When people are making their rounds, they don’t have to travel as far, and it is an advantage from that standpoint.”

In addition to the close quarters, workers also had to deal with rail operations going through the site while construction was underway. “When our ash silos get to the point where they need to be emptied, we would make allowances to move the crane or get access that would be needed,” Kreft said. “It takes a little bit of time, obviously, to unload that rail and the train doesn’t always come when you’re expecting it. There are just a lot of moving pieces there to coordinate, and people were very accommodating.”

The operation of the plant presented another challenge. Because of local energy markets, Edgewater Unit 5 has an extreme capacity range, operating from a minimum load of 60 MW to a maximum load of 430 MW. “This unit is one of our newest coal units and is one of our prime operating facilities, and it has the ability to do that big turndown, which fits into how the new energy market is operating,” Kreft said. “A lot of the fossil units… need to ramp down at night when energy isn’t needed and then quickly come back online. We’re seeing even during the day with additional wind on the wire that the unit needs to be able to be optimized with those other resources.”

Because of this extremely wide operating range, it was important to Alliant when accepting bids that the contractors being considered pitched a technical solution that would address that need. “We did a lot of reference checks and site visits to check on both the technology supplier as well as the engineer and constructor to make sure that we had a solid partner both for the project itself, but as importantly, we wanted to make sure we had the right technical solution for the life of the plant,” Kreft said.

A Solid Process from Start to Finish

Alliant offered very little specificity in its request for proposals, leaving it up to the bidders to pitch what they felt was the right solution. According to the PSC filing, Alliant credits this process in part for the low cost of the project. “WPL did not specify to potential contractors a specific scrubbing technology or supplier. This openness brought forth competitive bids for multiple scrubbing technology suppliers that ultimately drove project actual costs down significantly,” the filing says.

While the new system has been operational for a full year, members of the Alberici-Stanley team remain on site. “I think we worked very well after substantial completion this first year in to bring along all the other parties to make sure that when there are some warranty issues, however minor, that we listen and that we act quickly to get them resolved,” Bareiss said. “I think the best part of making sure that you have a happy customer at the end is finishing, going all the way through to the finish line.” ■