Paris-based Alstom just handed the keys to the new, 1,200-MW Cartagena combined-cycle power plant (Figure 2) to Barcelona-based Gas Natural. The facility was finished in 24 months and 12 days following its ordering in December 2003, and nine weeks ahead of schedule. Peter Papert, project manager for Cartagena, said, "It was built more quickly than any plant I’ve heard of. Alstom’s fast-track construction process sets the speed bar very high for others." 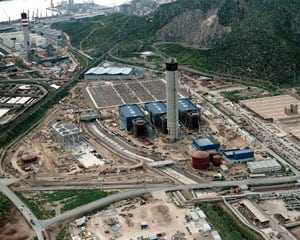 2. Power, pronto. This 1,200-MW power plant in Cartagena, Spain, took only two years to build. Modular parts sped assembly of equipment, and most major systems were assembled and delivered pretested on skids.

The plant comprises three identical, single-shaft power blocks rated at 406 MW apiece. The blocks generate power at 57% efficiency, pretty much regardless of load. Each block has a GT26 gas turbine equipped with a dry low-NOx combustion system with sequential premixing; an OCC (Optimized for Cycling and Constructability) heat-recovery steam generator (HRSG); a floor-mounted, two-casing, triple-pressure reheat steam turbine; and a hydrogen-cooled generator—all from Alstom. The company’s comprehensive O&M contract is expected to employ 40 people full time on site.

Modularity also was responsible for how quickly the plant was built. Most of its major auxiliary systems (cooling water, fuel and water handling, emissions monitoring, electrical and electronic) were prefabricated and delivered—pretested—on skids.