The term "fuel cell" may have entered the public lexicon in 1995 when Tom Hanks—as Apollo 13 Commander James Lovell (the real quote: "Houston, we’ve had a problem")—guided the command module back to Earth after faulty wiring caused an oxygen tank explosion and the loss of two of the craft’s three fuel cells. This "successful failure" of 1970 brought the astronauts home but failed to execute the mission—a moon landing.

Exactly one hundred years earlier, Jules Verne, the visionary science fiction writer, predicted that "water will one day be employed as a fuel." Verne, however, proposed using a large cannon, rather than rockets, to launch the space capsule that was the star of his book From the Earth to the Moon.

Ludwig Mond and Charles Langer have been credited with coining the term "fuel cell" a half-century later, although their experiments with using coal gas and air as the energy source didn’t pan out. In the early 1960s, General Electric developed a hydrogen-oxygen fuel cell for the Gemini and Apollo space flights that produced both power and water. Today, of course, high-efficiency fuel cell plants are sprouting like weeds and could actually overcome the unreasonable expectation placed on them: ushering in a new, worldwide energy economy based on hydrogen.

For the past 25 years, FuelCell Energy Inc. (FCE), based in Danbury, Conn., has been in the vanguard of companies seeking to make this revolutionary switch from fossil fuels feasible. What FCE is most known for is its development of molten-carbonate, internally reforming ("direct" energy converting) fuel cells (DFCs) capable of serving as efficient, simple, and cost-effective stationary power generation modules.

DFCs, which operate at about 1,200F, use alkali carbonates for their electrolyte, nickel-based compounds for their electrodes, and commonly available stainless steel hardware. They are typically fueled by natural gas, although other renewable fuels—such as digester gas—are gaining in popularity. All fuel cells produce few emissions other than water. In some cases, fuel cell-based power plants do not even require an emissions permit and may qualify for regulatory incentives or preferential rate treatment (see sidebar).

Building without a permit

How quickly could you build a power plant in California if it required no emissions permits?

FuelCell Energy (FCE) knows. Last December, its modular 250-kW Direct FuelCell (DFC) power plant was certified by the California Air Resources Board (CARB) as meeting its stringent distributed generation emissions standards for 2007. The certification qualifies the DFC 300A plant for state-sponsored economic incentives and enables users of it to avoid all that permitting red tape. The California Self Generation Program provides $400 million per year of incentive funding for technologies that burn natural gas or renewable fuels, such as anaerobic gas from wastewater treatment facilities.

With the certification, FCE’s DFC 300A power plant now is categorized as an "ultra-clean" distributed generation technology, exempting it from California’s air quality district permitting requirements (as spelled out at www.arb.ca.gov). It also qualifies FCE’s products for preferential rate treatment by the California Public Utilities Commission, including the elimination of exit fees and standby charges for customer electric generation. "These incentives and preferential rate treatment, combined with our cost-reduction efforts, allow us to provide end users with reliable, firm, baseload power with more control of their energy costs," said R. Daniel Brdar, FuelCell Energy’s new president and CEO.

What does a growing company that requires power and steam for its full-time operations do when unreliable utility service begins taking a toll on production and profits? Until recently, there were only two choices. Either you lived with the blackouts and brownouts, or you bought a natural gas-fired combustion turbine-generator and used it to make your own power and process steam. If you were lucky, and the energy economics made sense, you might even recoup some of your investment by selling a bit of juice back to the local utility at certain times.

Ken Grossman, founder and CEO of Sierra Nevada Brewing Co. (SNB) in Chico, Calif.—where local pub-goers are legendary consumers of his product—found himself having to make that decision several years ago. His first thought was to consider using a gasoline-powered engine or a combustion turbine system to ride herd on his brewery’s energy costs—especially expensive demand charges. The economics made sense, but Grossman was seriously concerned about the local environmental impact of self-generation, especially ammonia slip. So, he stopped short of inking a deal for a polluting engine or turbine to study other alternatives.

"While our brewery requires reliable power 24/7, Sierra Nevada also is committed to energy efficiency and reducing our environmental impact on the Chico community. We decided to buy and install a 1-MW Direct FuelCell power plant for two main reasons: its far lower emissions than those of a conventional power plant and its ability to produce the high-value heat by-product our brewing process requires." Grossman went on to say, "[A fuel-cell plant] was the most cost-effective and environmentally favorable on-site power generation solution for us."

A fuel cell-based project had all the attributes Grossman was looking for—near-zero emissions, extremely low noise, excellent plant energy balance, high system efficiency, and operating simplicity. The main roadblock was the high capital cost, although that blow was softened by cash incentives offered by the California Public Utilities Commission (see "Building without a permit").

A few phone calls later, and after several months of tough negotiations with FCE, SNB ended up buying four, 250-kW DFC300A molten-carbonate fuel cells (Figure 1) that now supply most of the brewery’s electrical load. The few kilowatt-hours of excess power that the system produces in winter months are sold back to Pacific Gas & Electric Co. (PG&E). 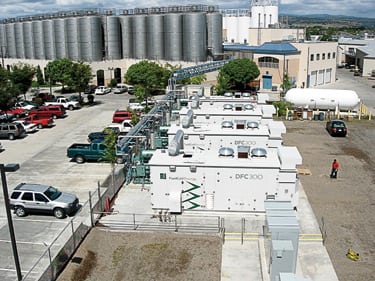 To get the system up and running, SNB (www.sierranevada.com) hired Littleton, Colorado-based Alliance Power (www.alliancepower.com)—a firm experienced in fuel cell and gas turbine construction project management. Alliance then formed an ad-hoc affiliate—Alliance Chico Energy—to own the plant; procure the fuel cells; design, build, and integrate the plant with the brewery; operate the plant and sell its output to SNB at a fixed cost (minus the incentives); and handle the interconnection with PG&E. About all that SNB is responsible for is purchasing the natural gas needed to supply the fuel cells.

To supplement the brewery’s existing 125-psi steam-supply system, the fuel cell plant design features heat-recovery devices that extract about 1 million Btu/hr of heat (Figure 2). Grossman is keen to point out that, although the fuel cell plant alone is rated at about 50% efficiency, the work of the heat-recovery devices pushes the overall system efficiency to 70%. Such efficiencies may be routine in the not-too-distant future for combined-cycle systems that mate fuel cells with unfired turbines, if FCE and the U.S. DOE have their way (see "Raising the plant efficiency bar").

Sorting through all the claims for the title of "most efficient power plant" is problematic. Many large, modern combined-cycle plants claim close to 50% gross efficiency. Even larger coal plants claim gross efficiencies in the mid-40% range, but they can cost more than $1 billion to build. The rule of thumb is: the smaller the plant, the less efficient it is likely to be. Even the most-efficient, low-emissions 1-MW-class gas engine can only work at 35%.

A new efficiency paradigm may be on the horizon, however. This February, FuelCell Energy (FCE) announced that its Direct FuelCell/Turbine (DFC/T) set a new mark of 56% electrical efficiency in the sub-1-MW class during 800 continuous hours of testing.

In 2002, the original Vision 21 contract was expanded to include the deployment and operation of an "alpha" DFC/T unit at two locations: FCE’s testing facilities in Danbury, Conn., and the Deaconess Billings Clinic in Montana, where it will supply baseload electricity for the hospital. Deployment of a beta unit, at another customer site, is planned for next year.

FuelCell Energy also has developed designs for a DFC/T power plant rated at 10 MW to 40 MW that could achieve an electrical efficiency of 70% or higher. This would approach the development objective of the Vision 21 Program: multi-megawatt power plants capable of converting natural gas to electricity at 75% efficiency with near-zero emissions. 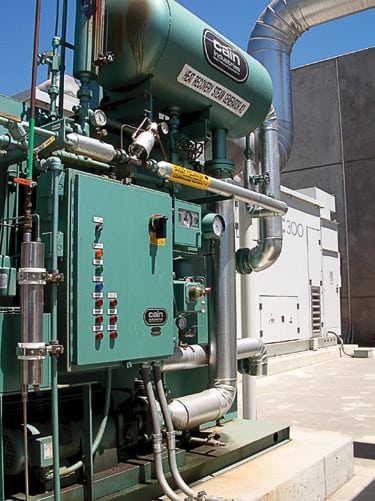 2. Heat recovery. Energy from the exhaust of the fuel cells is used to produce 125-psi process steam, reducing the load on the plant boilers. Courtesy: Sierra Nevada Brewery

The project broke ground in January 2005 and the fuel cells were installed by the end of last April. All four units were mechanically complete on April 29, with Unit 1 reaching full power on May 14 and the last unit on May 20, 2005. The longest wait on this project was the six months it took the fuel cells to be delivered.

Operations and maintenance of the plant couldn’t be easier; in fact, it has no full-time operations staff on-site. FCE monitors all of the key operating parameters of this and its many other plants from its remote operations center in Connecticut, through a secure, 24/7 Internet connection. If anything appears amiss, a specialist can immediately dispatch the technician dedicated to FCE’s northern California installations.

The economics of the fuel cell plant have held their own, even when gas prices spiked last year. PG&E’s average rate is about 12 cents/kWh. The plant’s variable generating costs have settled out at about 5 cents/kWh (with $6/mmBtu gas), excluding the costs of capital, overhead, and the long-term service agreement. Over their first year of operation, the fuel cells supplied about two-thirds of the brewery’s electrical load. Grossman describes the plant’s reliability as "in the high 90% range." Virtually all of the few problems that have arisen involved water treatment or components external to the fuel cells, and those were resolved quickly.

With beer, every drop counts

Never content with his firm’s efficiency or environmental performance, Grossman is now seeking to reduce his natural gas bill by using the gas by-product produced by the brewery’s on-site water treatment plant, which also handles the wastewater produced by beer-making (Figure 3). Anaerobic digestion of the wastewater—which contains spent grain and yeast—produces so much methane-rich biogas (about 850 Btu/scf) that recovering it could replace up to 40% of the natural gas currently burned in the fuel cells. 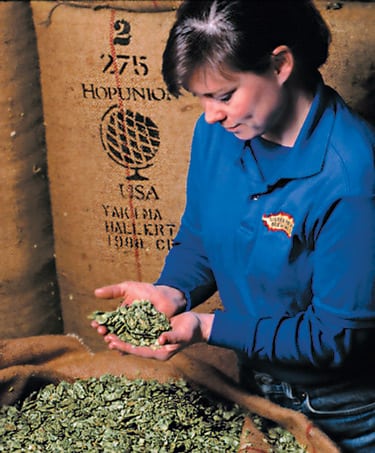 Recovering the gas would not only put a large dent in the brewery’s natural gas bill, but it also would represent SNB’s continued commitment to reusing/reducing/recycling wherever possible. The biogas retrofit was scheduled to have gone live this July (just after press time), and SNB is slated to assume ownership of the project 30 days after its successful commissioning. This seems to be another example of how Grossman has again broken the code for making environmental stewardship good business.

And he’s not done yet. Grossman says he is finalizing a deal with PowerLight Corp. (see the profile of the Bavaria Solarpark on p. 36) to install a 0.5-MW photovoltaic (PV) plant adjacent to the brewery in July, with a projected in-service date of early 2007. A PV system is a good match for any brewery, because summer is prime time for beer-making and -drinking. At SNB’s facility, that’s when electrical demand peaks at 1.7 MW.

Next time you’re in Chico, find time to tour the brewery and fuel cell plant and enjoy lunch or dinner at the Taproom and Restaurant or a concert at the 350-seat Big Room located right at the brewery. Just tell your boss the plant tour took longer than expected.